Fieldston is a privately owned affluent neighborhood in the Riverdale section of the northwestern part of the New York City borough of the Bronx. It is bounded by Manhattan College Parkway to the south, Henry Hudson Parkway to the west, 250th Street to the north, and Broadway to the east. It is noted for its rural atmosphere, large houses and abundance of trees. The majority of the neighborhood is included in the Fieldston Historic District, designated by the New York City Landmarks Preservation Commission in 2006.

The land that is now Fieldston was part of the estate of Major Joseph Delafield, who purchased 250 acres (100 ha) in 1829, and named it after his family's estate in England. The Delafield family laid out lots in 1909 – the year after the New York City Subway's Broadway – Seventh Avenue line was extended to Van Cortlandt Park, intending to develop the land, which at first was called "Delafield Woods". Rather than use a grid plan, civil engineer Albert E. Wheeler, following the suggestions made by Frederick Law Olmsted and James R. Croes in 1876, designed a street plan which followed the contours of the land and preserved as much of the wooded areas as possible. The first house was begun in 1910 and finished in 1911. In 1923, after the completion of 80 houses, the Fieldston Property Owner's Association was formed.

Buyers were provided with a list of approved architects, and historicist architectural styles – the various "revival" styles – were strongly encouraged. The Tudor revival style was popular in houses built in the 1920s; many of them were designed by local resident Dwight James Baum, who was responsible for 62 houses, while Julius Gregory is credited with forty-two. Many of the houses in the neighborhood were featured in design and architectural magazines, and the neighborhood had a reputation for having houses of quality design. In order to accommodate the project's plan to be a neighborhood of single-family dwellings, the New York City Planning Commission approved a special zoning district in 1938, which would not allow the construction of any multiple-family buildings.

By the beginning of the 21st century, Fieldston was one of the wealthiest neighborhoods in New York City. Fieldston is one of a few neighborhoods in New York City that is completely privately owned. The streets and common areas are owned by the Fieldston Property Owners' Association, Inc. which plows the streets, does sewer repair, cares for the trees – of which there are about 1000 – and runs a security patrol as well as other usually municipal functions, such as street repair. Annual dues are paid by the approximately 250 homeowners who make up the Association to maintain the area. Once a year, the streets are closed to non-residents to legally qualify the streets as privately owned; parking is restricted to residents and their guests. 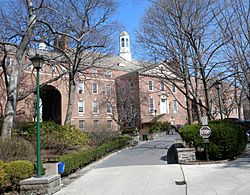 On January 10, 2006, the New York City Landmarks Preservation Commission designated the majority of the Fieldston neighborhood as an historic district. The district contains 252 houses and related structures. Some of the more noted houses, with the year of completion, the architect's name and the architectural style in parentheses:

Outside the historic district 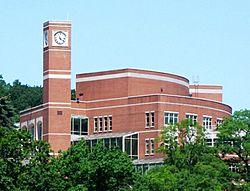 All content from Kiddle encyclopedia articles (including the article images and facts) can be freely used under Attribution-ShareAlike license, unless stated otherwise. Cite this article:
Fieldston, Bronx Facts for Kids. Kiddle Encyclopedia.