The Dyckman House, now the Dyckman Farmhouse Museum, is the oldest remaining farmhouse on Manhattan island, a vestige of New York City's rural past. The Dutch Colonial-style farmhouse was built by William Dyckman, c.1785, and was originally part of over 250 acres (100 ha) of farmland owned by the family. It is now located in a small park at the corner of Broadway and 204th Street in Inwood, Manhattan.

Dyckman was the grandson of Jan Dyckman, who came to the area from Westphalia in 1661. William Dyckman, who inherited the family estate, built the current house to replace the family house located on the Harlem River near the present West 210th Street, which he had built in 1748, and which was destroyed in the American Revolutionary War. 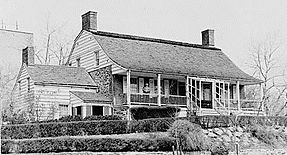 The current two-story house is constructed of fieldstone, brick and white clapboard, and features a gambrel roof and spring eaves. The porches are typical of the Dutch Colonial style, but were added in 1825. The house's interior has parlors and an indoor winter kitchen in the basement, thus serving as a heating for the first floor. The rooms have floors of varying-width chestnut wood. The house's outdoor smokehouse-summer kitchen, in a small building to the south, may predate the house itself. The back of the house holds a short hedges that resemble a maze.

The house stayed in the family for several generations until they sold it in 1868, after which it served as a rental property for several decades. By the beginning of the 20th century, the house was in disrepair and in danger of being demolished, and in 1915, the Dyckman family bought it back .

In 1915-16, two sisters of the Dyckman family, Mary Alice Dyckman Dean (Mrs Bashford Dean) and Fannie Fredericka Dyckman Welch, began a restoration of the farmhouse under the supervision of architect Alexander M. Welch, Fannie's husband. In 1916, they transferred ownership of the house to the City of New York, which opened it as a museum of Dutch and Colonial life, featuring the original Dyckman family furnishings.

The farmhouse – which is not only the oldest remaining in Manhattan, but the only one in the Dutch Colonial style, and the only 18th-century farmhouse in the borough as well – has been a New York City Landmark and a National Historic Landmark since 1967.

In 2003, the house underwent a major restoration, after which it re-opened to the public in the fall of 2005.

All content from Kiddle encyclopedia articles (including the article images and facts) can be freely used under Attribution-ShareAlike license, unless stated otherwise. Cite this article:
Dyckman House Facts for Kids. Kiddle Encyclopedia.