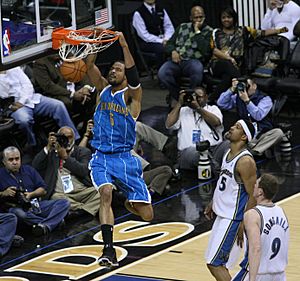 A slam dunk, also simply dunk, is a type of basketball shot that is performed when a player jumps in the air, controls the ball above the horizontal plane of the rim, and scores by putting the ball directly through the basket with one or both hands above the rim. It is considered a type of field goal; if successful, it is worth two points. Such a shot was known as a "dunk shot" until the term "slam dunk" was coined by former Los Angeles Lakers announcer Chick Hearn.

The slam dunk is usually the highest percentage shot and a crowd-pleaser.

Dunking was banned in the NCAA from 1967 to 1976. Many people have attributed this to the dominance of the then-college phenomenon Lew Alcindor (now known as Kareem Abdul-Jabbar); the no-dunking rule is sometimes referred to as the "Lew Alcindor rule."

The phrase "slam dunk" has entered popular usage in American English outside of its basketball meaning, to refer to a "sure thing": an action with a guaranteed outcome, or a similarly impressive achievement.

All content from Kiddle encyclopedia articles (including the article images and facts) can be freely used under Attribution-ShareAlike license, unless stated otherwise. Cite this article:
Slam dunk Facts for Kids. Kiddle Encyclopedia.