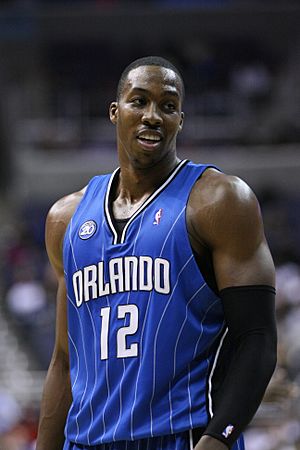 Dwight Howard during his time with the Orlando Magic

Dwight David Howard (born December 8, 1985 in Atlanta, Georgia) is a professional basketball player. He plays for the Los Angeles Lakers of the National Basketball Association (NBA). His position is center. The Magic chose Howard with the first pick overall in the 2004 NBA Draft. Howard did not play college basketball. He entered the draft right out of high school. Howard is one of the greatest rebounders and defensive players in the history of basketball. He is the NBA's active leader in offensive rebounds, total rebounds and blocked shots.

From roughly 2008 to 2012, Howard was widely considered both the best rebounder, best defensive and center basketball player in the world, as highlighted by leading the league in rebounding almost every season and winning a league record three consecutive NBA Defensive Player of the Year Awards in 2009, 2010 and 2011.

He showed frustration at the end of 2011-12 NBA season and demanded a trade to either the New Jersey Nets, Los Angeles Lakers or Dallas Mavericks. On August 10, 2012, he was traded from the Magic to the Los Angeles Lakers in a trade that also involved the Philadelphia 76ers and Denver Nuggets.

All content from Kiddle encyclopedia articles (including the article images and facts) can be freely used under Attribution-ShareAlike license, unless stated otherwise. Cite this article:
Dwight Howard Facts for Kids. Kiddle Encyclopedia.