Kevin Maurice Garnett (born May 19, 1976) is an American former professional basketball player who played for 21 seasons in the National Basketball Association (NBA). Known for his intensity, defensive ability, and versatility, Garnett is considered one of the greatest power forwards of all time. He is one of four NBA players to win both the Most Valuable Player and the Defensive Player of the Year awards.

In high school, Garnett was a 1995 McDonald's All-American at Farragut Career Academy and won a national player of the year award. He entered the 1995 NBA draft, where he was selected with the fifth overall pick by the Minnesota Timberwolves and became the first NBA player drafted directly out of high school in 20 years.

Garnett made an immediate impact with the Minnesota Timberwolves, leading them to eight consecutive playoff appearances. In 2004, he led the Timberwolves to the Western Conference Finals and won the NBA MVP Award. Garnett has been named to 15 All-Star Games, winning the All-Star MVP award in 2003, and is currently tied for third-most All-Star selections in NBA history. He was named the NBA Defensive Player of the Year in 2007–08, and has been selected nine times for All-NBA Teams and 12 times for All-Defensive Teams. Garnett also holds several Timberwolves franchise records.

In 2007, after 12 seasons with the Timberwolves, Garnett joined the Boston Celtics in a blockbuster trade. In his first year with the Celtics, he helped lead them to the NBA championship, while also finishing in third place for the MVP award. In 2013, Garnett was included in a second headline trade that sent him to the Brooklyn Nets with longtime Celtic Paul Pierce. In 2015, Garnett was traded back to Minnesota. He announced his retirement from professional basketball in September 2016. 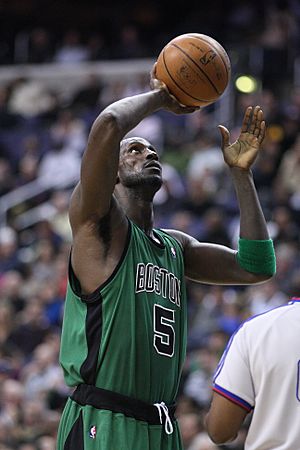 Garnett was born in Greenville, South Carolina, to Shirley Garnett. Garnett grew up with his mother and stepfather. He fell in love with the sport of basketball while attending Hillcrest Middle School, although he did not play organized basketball until high school.

In his first three years of high school, Garnett attended Mauldin High School in Mauldin, South Carolina and played on the school's basketball team. Garnett decided to leave Mauldin High and transferred to Farragut Career Academy in Chicago, for his senior year of high school.

He led Farragut to a 28–2 record and was named National High School Player of the Year by USA Today. He was also named Mr. Basketball for the state of Illinois. In four years of high school, Garnett posted an impressive 2,553 points, 1,809 rebounds and 737 blocked shots. In high school, Garnett played alongside Ronnie Fields, who also became a professional basketball player. 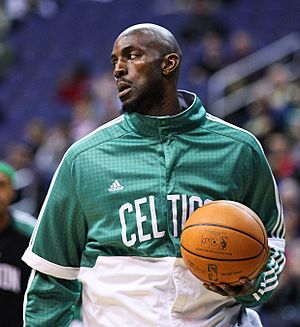 Garnett was drafted with the fifth overall pick in the 1995 NBA draft by the Minnesota Timberwolves, and became the first player to be drafted directly out of high school since 1975.

In the 2000 Summer Olympics, Garnett won a gold medal as a member of the United States national team. 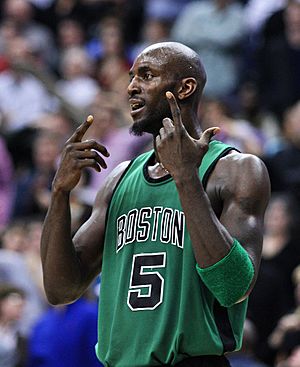 In October 2016, Garnett joined the crew on TNT's Inside the NBA. The following month, he became the host of his own segment, Area 21. In January 2017, Garnett joined the Los Angeles Clippers as a consultant. He also consulted with the Milwaukee Bucks during the 2016–17 season. 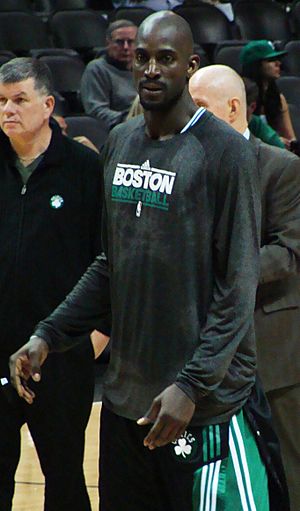 Kevin Garnett preparing to play against the San Antonio Spurs 2011

In July 2004, Garnett married his longtime girlfriend Brandi Padilla during a private ceremony in California. Due to the wedding, Garnett did not take part in the Athens Olympic Games. The couple have two daughters. On July 12, 2018, Garnett's wife filed for divorce.

Garnett is the half-brother of former basketball player Louis McCullough. Another professional basketball player, former Los Angeles Laker Shammond Williams, is his cousin. His nicknames include "The Big Ticket", "KG", "The Kid" and formerly "The Franchise" (after being known as the Minnesota Timberwolves' franchise player).

All content from Kiddle encyclopedia articles (including the article images and facts) can be freely used under Attribution-ShareAlike license, unless stated otherwise. Cite this article:
Kevin Garnett Facts for Kids. Kiddle Encyclopedia.