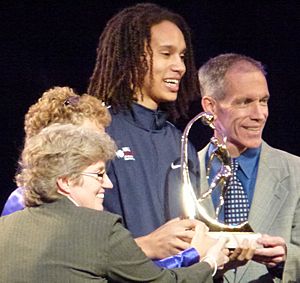 Griner accepting the Wade Trophy at the WBCA Awards show in Denver, Colorado

Brittney Yevette Griner (born October 18, 1990) is an American basketball player. She is 6 ft and 8 inches tall. She was the first NCAA basketball player ever to score 2,000 points and block 500 shots. She came out as lesbian in 2013. She plays for the Phoenix Mercury of the Women’s National Basketball Association. She was signed by Nike to model their clothes.

All content from Kiddle encyclopedia articles (including the article images and facts) can be freely used under Attribution-ShareAlike license, unless stated otherwise. Cite this article:
Brittney Griner Facts for Kids. Kiddle Encyclopedia.