East Meadow is a hamlet and census-designated place (CDP) in the Town of Hempstead in Nassau County, on Long Island, in New York, United States. The population was 38,132 at the 2010 census.

Many residents commute to Manhattan, which is 30 miles (48 km) away.

In 1655, two surveyors for Hempstead Town reported that the "east meadow" would be suitable for grazing. The area quickly became a grazing area for cattle and later, in the 18th century, for sheep. The sheep of the East Meadow, NY area provided the country with more than 50% of the United States' wool needs during that time.

During the American Revolutionary War, East Meadow was occupied by British forces when they discovered the vast amounts of livestock herded there, and remained under their control until the end of the war. Two large farms existed in what is now East Meadow: the Barnum farm (Barnum Woods), and the Carman farm. It is rumored that President George Washington spent a night on the Barnum estate during a trip across Long Island in 1790. A toll booth was operated near the Carman homestead on the Hempstead Turnpike.

Another early settlement was located near what is now the intersection of East Meadow Avenue (formerly called Newbridge Avenue; not to be confused with nearby Newbridge Road) and Prospect Avenue.

The community was home to many Gilded Era estates. The old Hoeffner homestead is now the site of Veterans Memorial park, and East Meadow's Post Office. The Barnum estate was rented by the Hoeffner family in 1914. Part of the old Barnum farm is now the site of Barnum Woods Elementary School, and the main road that passes by the school, Merrick Avenue, was originally called Barnum Avenue. The Oliver and Alva Belmont (formerly Alva Vanderbilt) estate of Brookholt once stretched across several hundred acres on both sides of Front Street to the west of Merrick Avenue.

On March 11, 2004, President George W. Bush made a visit to East Meadow for the groundbreaking of a new memorial for the victims of the September 11, 2001 attacks. 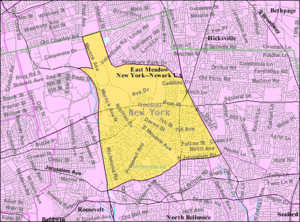 East Meadow is generally flat, and the elevation ranges from 32 feet (9.8 m) near its southwestern edge, to 82 feet (25 m) along Hempstead Turnpike to the north.

Almost no actual meadow remains in East Meadow or the Hempstead Plain, due to the boom of post-World War II development and later, unchecked suburban sprawl.

Getty Oil is based in East Meadow.

Snapple was previously headquartered in East Meadow, prior to moving their corporate office. The office space is now currently occupied by the Epilepsy Foundation of Long Island.

Lufthansa United States had its headquarters in East Meadow beginning in the 1970s, after it moved from Park Avenue in Manhattan, in order to save money. In 2019, the office had 206 employees; that year the headquarters moved to Uniondale.

East Meadow's nine public schools are operated by the East Meadow Union Free School District, Town of Hempstead School District #3. The district was originally organized in 1812 and then formally organized as Town of Hempstead Common School District #3 in 1814 under the name "Brushy Plains", and at one time was the third largest school district in New York State. The first school building was on Front Street (where the East Meadow Public Library building stands today). Four successive schoolhouses stood at the corner of Newbridge Avenue (now East Meadow Avenue) and Front Street between 1814 and 1950.

All content from Kiddle encyclopedia articles (including the article images and facts) can be freely used under Attribution-ShareAlike license, unless stated otherwise. Cite this article:
East Meadow, New York Facts for Kids. Kiddle Encyclopedia.