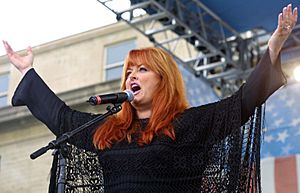 Christina Claire Ciminella, aka Wynonna Judd, is an American singer and songwriter. She first rose to fame during the 1980s as part of the duo The Judds with her mother Naomi Judd, who is also a singer. The duo had seven albums via Curb Records. Wynonna has had many solo albums.

All content from Kiddle encyclopedia articles (including the article images and facts) can be freely used under Attribution-ShareAlike license, unless stated otherwise. Cite this article:
Wynonna Judd Facts for Kids. Kiddle Encyclopedia.