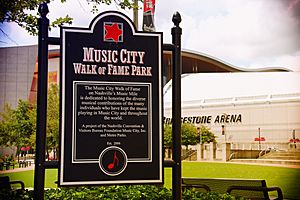 The Music City Walk of Fame in downtown Nashville, Tennessee, is a walk of fame that honors significant contributors to Nashville's musical heritage and significant achievements in the music industry.

Each honoree is commemorated with a large stainless steel and terrazzo star embedded in the sidewalk in Walk of Fame Park between the Country Music Hall of Fame, Bridgestone Arena, and Schermerhorn Symphony Center.

The walk was established in 2006 by the Nashville Convention and Visitors Bureau. Gibson Guitars is a founding sponsor.

Since 2014, the park has been under construction and is set to be reopened on June 4th, 2015. A new plaque design will be revealed along with the induction of artists Jack White and Loretta Lynn.

Honorees are inducted twice annually, in the spring and fall.

All content from Kiddle encyclopedia articles (including the article images and facts) can be freely used under Attribution-ShareAlike license, unless stated otherwise. Cite this article:
Music City Walk of Fame Facts for Kids. Kiddle Encyclopedia.