Kristoffer Kristofferson (born June 22, 1936) is an American singer-songwriter and actor. Among his songwriting credits are the songs "Me and Bobby McGee", "For the Good Times", "Sunday Mornin' Comin' Down", and "Help Me Make It Through the Night", all of which were hits for other artists.

Kristofferson composed his own songs and collaborated with Nashville songwriters such as Shel Silverstein. In 1985, Kristofferson joined fellow country artists Waylon Jennings, Willie Nelson and Johnny Cash in forming the country music super-group The Highwaymen, and formed a key creative force in the Outlaw country music movement that deliberately avoided the Nashville music machine in favor of independent songwriting and producing.

In 2004, Kristofferson was inducted into the Country Music Hall of Fame. He is also known for his starring roles in Alice Doesn't Live Here Anymore, Heaven's Gate, Blade and A Star Is Born, the latter of which earned him a Golden Globe Award for Best Actor.

Kristofferson's grandfather was an officer in the Swedish Army. When Kristofferson was a child, his father pushed him towards a military career.

At the age of 17, Kristofferson took a summer job with a dredging contractor on Wake Island. He called it "the hardest job I ever had." 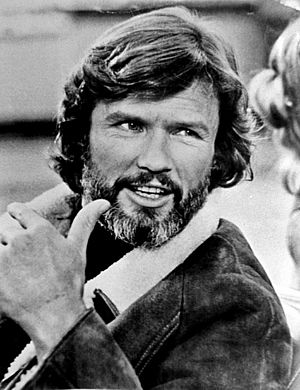 Like most "military brats", Kristofferson moved around frequently as a youth, finally settling down in San Mateo, California, where he graduated from San Mateo High School in 1954. An aspiring writer, Kristofferson enrolled in Pomona College that same year. Kris Kristofferson's early fiction work included essays which won him prizes.

He experienced his first dose of fame when he appeared in Sports Illustrated's "Faces in the Crowd" for his achievements in collegiate Rugby Union, American Football, and Track and Field. He and his classmates revived the Claremont Colleges Rugby Club in 1958, which has remained a southern California rugby institution.

Kristofferson graduated in 1958 with a Bachelor of Arts degree in literature. He was elected to Phi Beta Kappa his junior year. In a 2004 interview with Pomona College Magazine, Kristofferson mentioned philosophy professor Frederick Sontag as an important influence in his life. 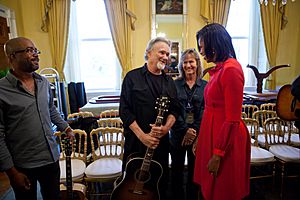 Kristofferson earned a Rhodes Scholarship to Oxford University, where he studied at Merton College. While at Oxford, he was awarded his Blue for boxing, played rugby for his college, and began writing songs.

With the help of his manager, Larry Parnes, Kristofferson recorded for Top Rank Records under the name Kris Carson. This early phase of his music career was unsuccessful. In 1960, Kristofferson graduated with a B.Phil. degree in English literature. 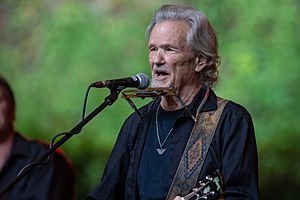 Kristofferson, under pressure from his family joined the U.S. Army, was commissioned as a Second Lieutenant and attained the rank of captain. He became a helicopter pilot after receiving flight training at Fort Rucker, Alabama. He also completed Ranger School.

During the early 1960s, he was stationed in West Germany as a member of the 8th Infantry Division. During this time, he resumed his music career and formed a band. In 1965, when his tour of duty ended, Kristofferson was given an assignment to teach English literature at West Point. Instead, he decided to leave the Army and pursue songwriting.

Kristofferson has said he is proud of his time in the military, and received the Veteran of the Year Award at the 2003 American Veterans Awards ceremony. 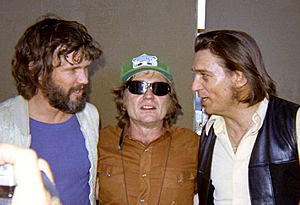 After leaving the army in 1965, Kristofferson moved to Nashville. He worked at a variety of odd jobs while struggling for success in music. He got a job sweeping floors at Columbia Recording Studios in Nashville. He met June Carter there and asked her to give Johnny Cash a tape of his. She did, but Johnny put it in a large pile with others. He also worked as a commercial helicopter pilot for south Louisiana firm Petroleum Helicopters International (PHI).

Weeks after giving June his tapes, Kristofferson landed a helicopter in Cash's front yard, gaining his full attention. Cash decided to record "Sunday Mornin' Comin' Down" and that year Kristofferson won Songwriter of the Year at the Country Music Awards. 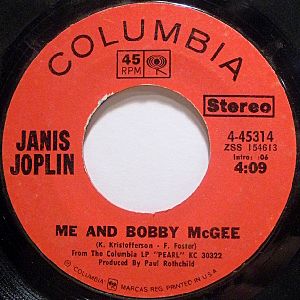 Janis Joplin - Me And Bobby McGee

Kristofferson signed to Monument Records as a recording artist. His debut album for Monument in 1970 was Kristofferson, which included a few new songs, as well as many of his previous hits.

In 1971, Janis Joplin, who dated Kristofferson for some time until her death, had a number one hit with "Me and Bobby McGee" from her album Pearl. When released, it stayed on the number-one spot on the charts for weeks. More hits followed from others using his compositions. The country music performer Kenny Rogers has also recorded some of Kristofferson's compositions, including a version of "Me and Bobby McGee" in 1969 with The First Edition for the Ruby, Don't Take Your Love To Town album.

Kristofferson released his second album, The Silver Tongued Devil and I in 1971. It was a success and established Kristofferson's career as a recording artist in his own right. Soon after, Kristofferson made his acting debut. For the next several years, Kristofferson focused on acting. 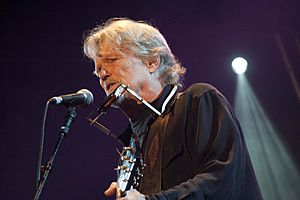 Kristofferson married Lisa Meyers in 1983. They own a home in Los Flores Canyon in Malibu, California, and maintain a residence in Hana on the island of Maui.

Kristofferson has encountered a few serious medical issues in the past few decades. He had successful bypass surgery in 1999, but from 2004 to 2015 suffered from what was finally diagnosed as Lyme disease. It is unclear how Kristofferson contracted Lyme disease but it is suspected that he caught it while filming a movie in the remote woods of Vermont in 2002.

All content from Kiddle encyclopedia articles (including the article images and facts) can be freely used under Attribution-ShareAlike license, unless stated otherwise. Cite this article:
Kris Kristofferson Facts for Kids. Kiddle Encyclopedia.