Kids Encyclopedia Facts
Not be confused with the former city in Jefferson Parish, Louisiana, which was absorbed into New Orleans in 1852.

The American city was founded as Vermilionville in 1821 by Jean Mouton, a French-speaking man of Acadian descent. In 1884, it was renamed for General Lafayette, who fought with and significantly aided the American Army during the American Revolutionary War. The city's economy was primarily based on agriculture until the 1940s, when the petroleum and natural gas industries became dominant.

Lafayette is considered the center of Acadiana, the area of Cajun and Creole culture in Louisiana and the United States. It developed following the relocation of Acadians after their expulsion by the British from eastern Canada in the late 18th century following France's defeat in the Seven Years' War. There is also a strong Louisiana Creole influence in the area.

This land, called the southwestern Louisiana Prairie Terrace, is higher up and not made of wetland like much of the surrounding areas to the south and west of Lafayette. Because of this, Lafayette does not suffer significant flooding problems, outside of local flash flooding, or other high water levels which prevent the Vermilion River or other waterways from their usual southward flow. The Vermilion River runs through the center of Lafayette. Other significant waterways in the city are Isaac Verot Coulee, Coulee Mine, Coulee des Poches and Coulee Ile des Cannes, which are natural drainage canals that lead to the Vermilion River.

Lafayette's climate is described as humid subtropical using Köppen climate classification. Lafayette is typical of areas along the Gulf of Mexico in that it has hot, humid summers and mild winters. (See table below for average temperatures for Lafayette.) 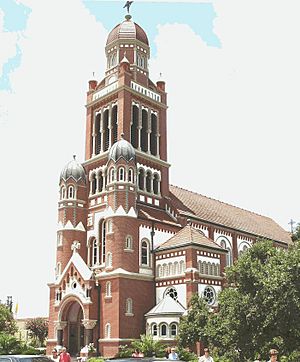 There were 43,506 households out of which 31.3% had children under the age of 18 living with them, 43.9% were married couples living together, 14.6% had a female householder with no husband present, and 37.7% were non-families. Nearly 29.4% of all households were made up of individuals, and 8.0% had someone living alone who was 65 years of age or older. The average household size was 2.43 and the average family size was 3.07. 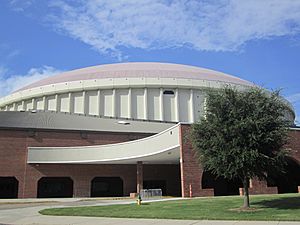 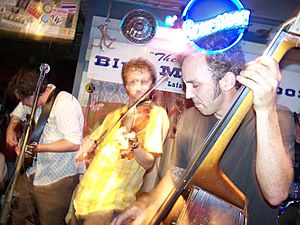 The Lost Bayou Ramblers playing at the Blue Moon Saloon

Lafayette is served by Cox Communications, and by Lafayette Utilities System's LUSFiber.

Lafayette is home to:

Lafayette is also served by:

Six intersections in the downtown area are each named after one of its sister cities.

All content from Kiddle encyclopedia articles (including the article images and facts) can be freely used under Attribution-ShareAlike license, unless stated otherwise. Cite this article:
Lafayette, Louisiana Facts for Kids. Kiddle Encyclopedia.