Poitiers is a city in France, the prefecture of the Vienne department in the Nouvelle-Aquitaine region. The town is picturesque; and its streets are interesting for their remains of ancient architecture, especially of the Romanesque period, and the memories of great historical events.

The city itself is very old. It already existed as a Gaulish fort in the time when Julius Caesar came to Gaul. It was the capital of the Pictones tribe.

Poitiers is in the centre of the Vienne department, between the valleys of the Boivre and the Clain rivers. The old town is on the slopes and the summit of a plateau which rises 130 feet (40 m) above the streams which surround it on three sides.

The commune of Poitiers is surrounded by the communes:

The climate of Poitiers, in the Köppen climate classification, is Cfb - Oceanic climate with template summers.

The inhabitants of Poitiers are known, in French, as Pictaviens (women: Pictaviennes).

Evolution of the population in Poitiers 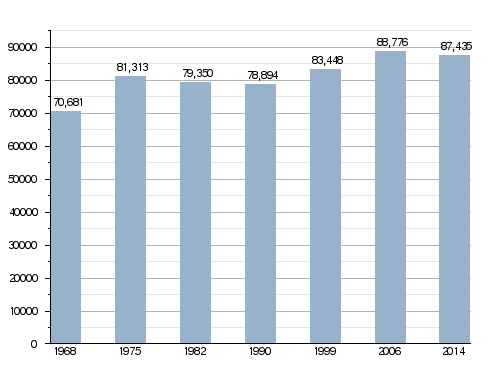 Poitiers is the prefecture of the Vienne department, the capital of the arrondissement of Poitiers and the administrative centre (French: chef-lieu) of five canton:

Poitiers is twinned with:

This is a list of people of interest who were born or resided in Poitiers:

All content from Kiddle encyclopedia articles (including the article images and facts) can be freely used under Attribution-ShareAlike license, unless stated otherwise. Cite this article:
Poitiers Facts for Kids. Kiddle Encyclopedia.