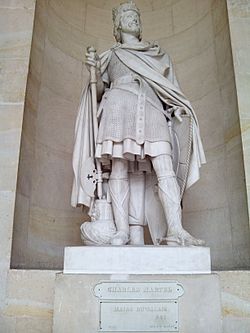 Statue of Charles Martel in the palace of Versailles

Charles Martel (c. 688 – 22 October 741) was a Frankish statesman and military leader who was Duke and Prince of the Franks. He was also Mayor of the Palace. Martel was the de facto ruler of Francia from 718 until his death. Martel was the illegitimate son of the Frankish statesman Pepin of Herstal. His mother was a noblewoman named Alpaida. Martel successfully asserted his claims as successor to his father as Mayor of the Palace. He continued and built on his father's work. He began the series of military campaigns that re-established Frankish power in Gaul. In foreign wars, Martel defeated and ruled Bavaria, Alemannia, and Frisia. He defeated the Saxons, and halted the Islamic advance into Western Europe at the Battle of Tours in 732.

Martel is considered to be the founding figure of the European Middle Ages. He was skilled as an administrator and warrior. Martel is often credited with a key role in the development of feudalism and knighthood. He was a great patron of Saint Boniface. Martel made the first attempt at reconciliation between the Papacy and the Franks. The Pope wished him to become the defender of the Holy See and offered him the Roman consulship. Martel refused the offer.

Although Martel never assumed the title of king, he divided Francia, like a king, between his sons Carloman and Pepin. The latter became the first of the Carolingians, the family of Charles Martel, to become king. Martel's grandson, Charlemagne, extended the Frankish realms to include much of the West. Charlemagne became the first Emperor since the fall of Rome. On the basis of his achievements, Martel laid the groundwork for the Carolingian Empire.

All content from Kiddle encyclopedia articles (including the article images and facts) can be freely used under Attribution-ShareAlike license, unless stated otherwise. Cite this article:
Charles Martel Facts for Kids. Kiddle Encyclopedia.