Acadiana, or The Heart of Acadiana (Cajun French: L'Acadiane), is the official name given to the French Louisiana region that is home to a large Francophone population. Many are of Acadian descent and are now identified as Cajun. Of the 64 parishes that make up the U.S. state of Louisiana, 22 named parishes and other parishes of similar cultural environment make up this intrastate region.

The word Acadiana reputedly has two origins. Its first recorded appearance dates to the mid-1950s, when a Crowley, Louisiana, newspaper, the Crowley Daily Signal, coined the term in reference to Acadia Parish, Louisiana.

However, KATC television in Lafayette independently coined "Acadiana" in the early 1960s, giving it a new, broader meaning, and popularized it throughout south Louisiana. Founded in 1962, KATC was owned by the Acadian Television Corporation. In early 1963, the ABC affiliate received an invoice erroneously addressed to the Acadiana Television Corp. Someone had typed an extra "a" at the end of the word "Acadian." The station started using it to describe the region covered by its broadcast signal.

In 1971, the Louisiana State Legislature officially recognized twenty-two Louisiana parishes and "other parishes of similar cultural environment" for their "strong French Acadian cultural aspects" (House Concurrent Resolution No. 496, June 6, 1971, authored by Carl W. Bauer of St. Mary Parish), and made The Heart of Acadiana the official name of the region. The public, however, prefers the one-word place name Acadiana to refer to the region. The official term appears on regional maps and highway markers.

In 1965, Thomas J. Arceneaux designed a flag for Acadiana. Arceneaux was a professor at University of Southwestern Louisiana, now University of Louisiana at Lafayette. He derived the flag from the university seal. In 1974, the Louisiana legislature officially adopted Arceneaux's design as the official Acadiana flag (House Concurrent Resolution 143, passed 5 July 1974).

The three white fleurs-de-lis on the blue field represent the French heritage of Acadiana, the gold star on the white field symbolizes Saint Mary, Our Lady of the Assumption, patron saint of Acadiana; and the star also symbolizes the active participation of the Cajuns in the American Revolution, as soldiers under General Bernardo de Gálvez, Spanish governor of Louisiana. The gold tower on the red field represents Spain, which was governing Louisiana when the Acadians arrived, after the French had ceded their territories in North America.

The flag is used in a variety of ways in the Acadiana region. Some local governments fly the flag of Acadiana with their respective local colors and the American flag. Many residents of Acadiana fly the flag on their homes or businesses. Many consider it a symbol of the historic and present socio-economic ties that bind the region.

Cajuns are the descendants of 18th-century Acadian exiles from what are now Canada's Maritime Provinces, expelled by the British and New Englanders during and after the French and Indian War (see Expulsion of the Acadians). They prevail among the region's visible cultures, but not everyone who lives in Acadiana is culturally Acadian or speaks Cajun French. Similarly, not everyone who is culturally Acadian or "Cajun" is descended from the Acadian refugees.

German settlers found their way to this area as early as 1721, settling an area that became known as the German Coast. They preceded the Acadians. Since the late 20th century, political refugees from southeast Asia (Laos, Vietnam, and Cambodia, among others) have brought their families, cultures, and languages to the area, and have contributed significantly to its fishing industry.

Acadiana is home to several Native American tribes, including the Chitimacha, Houma, Tunica-Biloxi, Attakapas, and Coushatta. The region also boasts a large population of Creoles, descendants of the region's original "Old World" settlers who arrived in Louisiana before and after the Acadian immigration (and who in Louisiana can be black, white, or mixed-race persons, because Creole in its broadest sense means "Native to Louisiana"). (See Louisiana Creole people and Créole French.) Acadiana also is home to other ethnic groups, including Anglo-Americans, who came into the region in increasing numbers beginning notably with the Louisiana Purchase of 1803.

Acadiana is unusual for the South because a majority of its people are Roman Catholic, in contrast to the surrounding regions, which are part of the largely Protestant and Baptist Bible Belt.

Acadiana consists mainly of low gentle hills in the north section and dry land prairies, with marshes and bayous in the south closer to the coast. The wetlands increase in frequency in and around the Calcasieu River, Atchafalaya Basin, and the Mississippi River Delta. The area is cultivated with fields of rice and sugarcane.

Three of the parishes, St. Charles, St. James, and St. John the Baptist, are considered the River Parishes and made up the area formerly known as the German Coast or les côtes des Allemands, because of settlement by German immigrants in the 18th century. Ascension Parish is sometimes included with the River Parishes.

The traditional industries of the area, agriculture, petroleum, and tourism, initially drove the need for transportation development. In recent years, hurricane evacuation plans for the area's growing towns and cities have hastened the planning and construction of better roadways. The abundance of swamps and marshes previously made Acadiana difficult to access, a major reason for the near isolation of the early Cajun people, until oil was found in the area in the early 20th century.

High-capacity, modern highways are the lifelines of the region. US Highways 90, 190, and 167 were the main connectors through south Louisiana until the 1950s. Interstates 10, 210, 55, and 49 now play the major role in transportation. US and state highways also cross the region.

Rail transport through the area is limited by the difficult terrain and the sheer number of bridges required to build over numerous streams and bayous. A robust railroad system was being built at the time of the American Civil War, but much of it was destroyed during the conflict. By the end of the war, river transport via paddlewheeler had taken over as the preferred mode of travel. The major railways in operation through the region are the Burlington Northern Santa Fe Railroad and the Union Pacific Railroad.

Waterways are vital to the commercial and recreational activities of the region. Seaports, rivers, lakes, bayous, canals, and spillways dot the landscape, and served as the primary source of shipping and travel through the early 1930s. The Mississippi River is important to the eastern section, the Atchafalaya River to the middle. Calcasieu River flowing through Lake Charles enables shipping traffic in the western portion, while the Sabine River forms the western border of both Acadiana and Louisiana. Fresh and saltwater lakes, along with almost the entire Louisiana portion of the Intracoastal Waterway, enable the flow of people and materials.

The area's larger airports in Lafayette, Houma, and Lake Charles provide regional leisure travel. Most air travel in the area, not counting the extreme amount of flyover traffic from hubs like New Orleans and Houston, is local in nature and provided by small planes and helicopters. Helicopter pilots service the oilfields in the Gulf of Mexico. Small planes are used for short trips and agricultural needs. Small regional airports serve communities throughout the area. 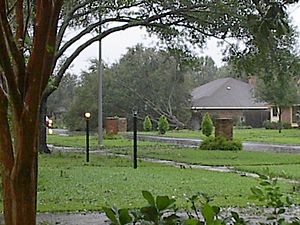 Tree blown down during Hurricane Lili

On October 3, 2002, the central Acadiana region suffered a direct hit from category one Hurricane Lili. The hurricane caused most of Acadiana to lose power, and some areas lost phone service. In addition, some high-rise buildings in downtown Lafayette had windows broken and many homes throughout the region had roof damage. The high winds of Lili toppled the tower of KLFY TV-10, the regional CBS affiliate, onto the station's studio facilities. Only one injury inside the station was reported from the tower's collapse.

The eastern Acadiana region was somewhat affected by Hurricane Katrina on August 29, 2005, although the damage was nowhere near what it was farther east. The region was used by many returning evacuees as a "last stop" of temporary domicile before returning to the Greater New Orleans region. This was due in large part to the Greater Baton Rouge area already being inundated with evacuees. Then state Governor Blanco made a public request that those returning not try to seek lodging in the capital due to this crisis of overpopulation. Lafayette and several other municipalities had both public and church-run shelters set up to handle the influx. The largest of these shelters, run by the Red Cross, was the Lafayette sports arena the Cajundome, holding a reported 9,800 persons.

The western Acadiana region and east Texas were most affected by Hurricane Rita on September 24, 2005. The Greater Lake Charles region saw the majority of the damage.

On Labor Day 2008, Hurricane Gustav caused severe damage to the region. Although Lafayette, Saint Martinville and Crowley had little damage (comparatively) and some still had power, the rest of the region was not as lucky. From Alexandria to the coast and Baton Rouge to Lake Charles there were reports of massive power failures and flooding. Most notable was the flooding south of Louisiana Highway 14 and the communities there. US 90 was shut down for several days due to the flooding caused by Gustav.

The total death toll from Gustav in Acadiana was limited. This was attributed to the evacuation and mitigation plans that had been drilled by state and local official and to a strong presence of both the Department of Homeland Security and the Federal Emergency Management Agency. In total, almost two million people along the Louisiana coast were evacuated in just over two days. This made Gustav preparations the largest evacuation in Louisiana history and one of the most successful evacuations in the nation's history.

As of 11 May  2011 (2011 -05-11)[update] the US Army Corps of Engineers believes that if the Morganza Spillway is not opened to funnel 300,000 cubic feet per second (8,500 m3/s) of water from the Mississippi River into the Atchafalaya River basin, that water which would be diverted by opening the spillway could potentially cause levees to fail along the river from Morganza to Plaquemines Parish, including all of the New Orleans area, resulting in as much as 25 feet (7.6 m) of floodwater. Opening the Morganza Spillway to this extent would only use 50% of the spillway's designed flow capacity.

All content from Kiddle encyclopedia articles (including the article images and facts) can be freely used under Attribution-ShareAlike license, unless stated otherwise. Cite this article:
Acadiana Facts for Kids. Kiddle Encyclopedia.