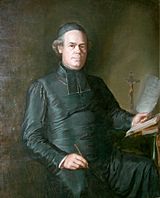 Formerly called La Chapelle, the land that would become Abbeville was purchased by founding father Père Antoine Désiré Mégret (Père is French for 'Father'), a Capuchin missionary on July 25, 1843 for $900. There are two theories how the town was named. The theory that is generally accepted is Mégret named the town after his home in France. The second theory which also cannot be discounted states that it is a combination of "Abbe" for Abbé Mégret and "ville" the French word for town – thus Abbé's town. Some support for the second theory is found because the town in France is pronounced "Abbville" by its denizens. However, in 1995, Fr. Jean Desobry discovered the diocesan archives of Amiens the proof of Mégret's birthplace. In the archive, the dossier of Fr. Antoine Jacques Désiré Mégret was found, and that he was born on May 23, 1797, at Abbeville and became founder of Abbeville in Louisiana. Dr Mary-Theresa MacCarthy wrote in her article Un Autre Abbeville in the 1996 edition of Bulletin de la Société des Antiquaires de Picardie (translation by Father Herbert),

On February 12, 1844, the pastor gave to his American town the name of the town of his birth. Residents find this name especially fitting because of the French word abbé which means father [or priest] added to the French word ville [which means town]. Their Abbeville is truly la ville de l'abbé [the priest's town].

Settlers were primarily descendants of the Acadians from Nova Scotia that moved to the area around 1766 to 1775. The town was incorporated in 1850. There were two people living on the land at the time, Joseph LeBlanc and his wife Isabelle Broussard, whose former home Father Megret converted into a chapel. The chapel burned in 1854, and in 1910 St. Mary Magdalen Catholic Church, Rectory, and Cemetery were built and still stand today.

Father Megret modeled his original plan for the village after a French Provincial village. In a map he designed in 1846, the town was 38 to 40 acres (160,000 m2) in size. It was bounded on the north by St. Victor Boulevard, on the south by Lafayette Boulevard, on the east by "the Sisters of Charity," and on the west by Bayou Vermilion. At this point in time the town was called “Abbville”.

The center of downtown is Magdalen Square, which is accented by large oak trees, a fountain, and gazebo. A statue in memory of Father Megret stands in the square. In 1856, the Last Island Hurricane destroyed every building in the town.

Abbeville is located near the southern terminus of U.S. Highway 167. Abbeville Chris Crusta Memorial Airport is in the eastern part of the city. The Vermilion River runs through downtown, and several canals and coullies run through other parts of Abbeville. 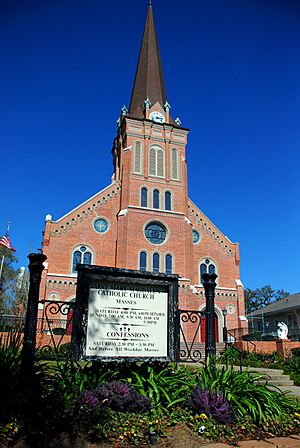 Abbeville is the home of HHC (headquarters company), 2nd Battalion, 156th Infantry (mech.), of the Louisiana Army National Guard. The 2nd Battalion served with the 256th Infantry Brigade ("The Tiger Brigade") during Operation Iraqi Freedom in 2004–2005.

Abbeville is home to several festivals:

The Abbey Players' Theater is a prominent local playhouse in Abbeville. The Acadian Museum is east of the city in nearby Erath, Louisiana. Avery Island, which contains a bird sanctuary, salt dome, and world-famous Tabasco factory is 15 miles southeast of the city.

Abbeville is the home of numerous historic buildings that have been added periodically to the National Historic Register. Starting in 1987, the Abbeville Commercial Historic District, in the area surrounded by Concord, State, Lafayette, and Jefferson Streets, was added to the register. That same year, the Abbeville Residential Historic District was created between W. Oak, State, Cherry, and the Vermilion River. St. Mary Magdalen Church, Rectory, and the Cemetery were added the following year. In the 1990s, the Ovide Broussard House, Chauviere House, Gordy House, Lyons House, and the Caldwell House were all added, in addition to the Downtown Abbeville Historic District, which is bounded by State, 1st, Pere Megret, and Concord St and the Vermilion Bayou. Finally, just before the turn of the century, the Richard Cattle Auction Barn and the St. Mary Congregational Church were both added. North of Abbeville, A La Bonne Veillee was added in 1984.

The Southern Pacific Railroad has a route through the city, which helped bring freight produced locally to market.

The Freshwater Bayou Deepwater Channel connects Abbeville to the Gulf of Mexico, and the Intracoastal Waterway runs south of the city.

All content from Kiddle encyclopedia articles (including the article images and facts) can be freely used under Attribution-ShareAlike license, unless stated otherwise. Cite this article:
Abbeville, Louisiana Facts for Kids. Kiddle Encyclopedia.