Vermilion Parish (Paroisse de Vermillon) is a parish located in the U.S. state of Louisiana. As of the 2010 census, the population was 57,999. The parish seat is Abbeville. The parish was created in 1844.

Vermilion and neighboring Cameron parishes are represented in the Louisiana State Senate by the Republican Jonathan W. Perry of Kaplan.

In the past several decades, much of the southern portion of the parish has been swept away by water erosion, especially after Hurricane Katrina and Hurricane Rita in 2005.

Indigenous peoples lived in the area for thousands of years, from different cultures. By historic times, the Chitimacha and Atakapa inhabited the area and were the American Indians encountered by Spanish and French explorers and settlers. The tribes' numbers were drastically reduced as a result of exposure to European diseases to which they had no immunity.

French, Spanish, enslaved Africans, and French-Canadians from Acadia expelled after the Seven Years' War won by Great Britain, had all entered the area by the end of the 18th century. As the population became mostly Cajun, the primary language was French for years. In the mid- to late 19th century, they were joined by European Americans; immigrants from Italy, recruited to work on the plantations, as well as Jewish immigrants from Germany and eastern Europe, who tended to settle in towns and become merchants. 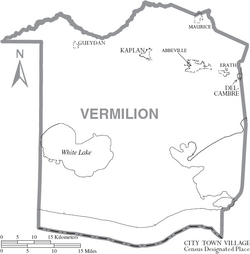 All content from Kiddle encyclopedia articles (including the article images and facts) can be freely used under Attribution-ShareAlike license, unless stated otherwise. Cite this article:
Vermilion Parish, Louisiana Facts for Kids. Kiddle Encyclopedia.