In 2005, the parish was damaged significantly by Hurricane Rita, which caused much wind damage and flooding in the western part of the parish. The storm also caused Lacassine National Wildlife Refuge to be affected by saltwater intrusion.

The first oil in Louisiana was drilled in 1901 in what became Jeff Davis Parish by W. Scott Heywood, who in 1932 was elected to the Louisiana State Senate.

Jefferson Davis Parish comprises five incorporated towns including Elton, Fenton, Jennings, Lake Arthur, and Welsh. There are also many unincorporated areas that add to the interest and economic structure of the parish including Barnsdall, Buller, China, Coverdale, Edna, Fontenot, Foreman's Hall, Hathaway, Illinois Plant, Lacassine, Lauderdale, Panchoville, Pine Island, Raymond, Roanoke, Silverwood, Thornwell, Topsy, Verret, and Woodlawn. Interstate 10 runs east and west through the center of the parish, providing quick, easy access to local markets. Additionally, the Union Pacific Railroad is centrally located within the parish and the Mermentau River, which connects to the Intracoastal Waterway and has a channel depth of nine feet, provides access to the Port of Mermentau. The Jennings Airport, with a runway length of 5,000 feet (1,500 m), is capable of landing a small jet and is conveniently located next to Interstate 10. Thanks to these and many other attributes within its community, the overall economic outlook for the parish is promising. Jefferson Davis Parish also attracts sportsmen to the Lacassine National Wildlife Refuge. 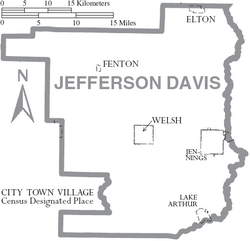 All content from Kiddle encyclopedia articles (including the article images and facts) can be freely used under Attribution-ShareAlike license, unless stated otherwise. Cite this article:
Jefferson Davis Parish, Louisiana Facts for Kids. Kiddle Encyclopedia.