Evangeline Parish (French: Paroisse d'Évangéline) is a parish located in the U.S. state of Louisiana. As of the 2010 census, the population was 33,984. The parish seat is Ville Platte.

The parish was created out of lands formerly belonging to St. Landry Parish in 1910. The majority of the area were originally settled by colonist French directly from France, and former colonial Canadian marines (coureurs de bois) previously from Fort Toulouse, Alabama to Fort Kaskaskia in the Illinois country and including later Napoleonic and 19th-century French and European French-speaking soldier and immigrant families.

The early generations born in colonial French colonies, which included the enormous Louisiana Territory ('Upper and Lower' Louisiana) was known as "la Nouvelle France" and included this region, then under Spanish rule, and whose citizens were originally called Isleños.

Many people of Evangeline are primarily of French, English & Spanish descent in Colonial Louisiana. Some of the major families included Fontenot, Brignac, Ardoin, Bordelon, Vidrine, LaFleur, Chataignier, Dupre, Berza, Manuel, Ratelle, Fuselier, Landreneau, Andrepont, LeBas and Gobert, along with many others.

People of Canary Islands Spanish heritage can be found to have settled in the Parish, bearing names like Ortego, Rozas, De Soto and Casaneuva. Many English colonists that came to collect Louisiana territory married into French families, and some prominently held the surnames of Young, Reed, Langley and Buller.

A few Acadians such as Francois Pitre and his wife had settled the area between Evangeline and St. Landry parishes, preferring the rich pre-American and pre-Civil War era Cajun planter's lifestyle over that of the humble and isolated existence of their Acadian Coast cousins.

The parish was named Evangeline in honor of Henry Wadsworth Longfellow's narrative poem, Evangeline. Evangeline Parish is mentioned in the Randy Newman song "Louisiana 1927", in which he described the Great Mississippi Flood which covered it with six feet of water. It was from this poem that founding father, Paulin Fontenot was to propose the namesake of "Evangeline" for this parish, allegedly foreseeing an emerging American tourism centered upon the Acadian saga.(See Ville Platte Gazette, Sept. 2010) In 19th-century American literature, she would gain popularity through Hollywood's interest, and thus began the embryonic 'Acadian-based' tourism which sprang up in St. Martinville. 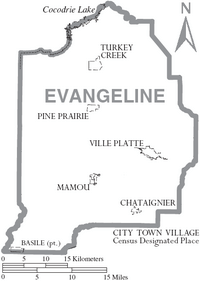 Evangeline Parish is also served by the Diocese of Lafayette with one school:

Additionally, Evangeline Parish is served by one unaffiliated private school:

Evangeline Parish is served by one institutions of higher education:

All content from Kiddle encyclopedia articles (including the article images and facts) can be freely used under Attribution-ShareAlike license, unless stated otherwise. Cite this article:
Evangeline Parish, Louisiana Facts for Kids. Kiddle Encyclopedia.