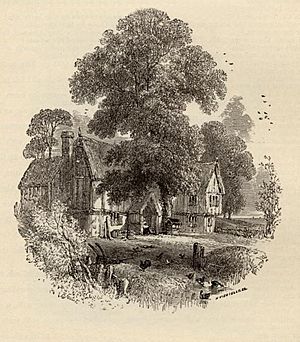 Evangeline, A Tale of Acadie is a long poem. It was written by Henry Wadsworth Longfellow. It was published in 1847. The poem is about a girl named Evangeline. She searches for her lost love Gabriel. Longfellow got the idea for the poem from his friend Nathaniel Hawthorne. He modelled the poem on the Greek and Roman classics. Evangeline is one of Longfellow's most popular works.

Evangeline is a girl of Acadie, a place in Canada. She is engaged to Gabriel. They are separated when the British deport the Acadians from Acadie in the Great Upheaval. She searches for him across America. This takes many years. Sometimes she is close to him without knowing he is near. Finally she settles in Philadelphia. She grows old. She works as a Sister of Mercy among the poor. She tends the dying during an epidemic. She finds Gabriel among the sick. He dies in her arms.

All content from Kiddle encyclopedia articles (including the article images and facts) can be freely used under Attribution-ShareAlike license, unless stated otherwise. Cite this article:
Evangeline Facts for Kids. Kiddle Encyclopedia.