Beauregard Parish (French: Paroisse de Beauregard) is a parish located in the U.S. state of Louisiana. As of the 2010 census, the population was 35,654. The parish seat is DeRidder. The parish was formed on January 1, 1913.

Until 1762, the land that would eventually become Beauregard Parish was a part of the Spanish holdings in Louisiana, as, at that time, the border between Spain and France was acknowledged as the Rio Hondo (now known as the Calcasieu river); however the land between the Rio Hondo and the Sabine river was in some dispute as the French were beginning to occupy land on the west side of the Rio Hondo. In 1762, the king of France secretly gave Louisiana to Spain in the Treaty of Fontainebleau. From 1762 to until 1800, the region was a part of New Spain. In 1800, the secret Third Treaty of San Ildefonso transferred possession of Louisiana back to the French, although Spain continued to administer the land. In this period, the only European settlers to the land that would become Beauregard Parish were a few individuals with Spanish land grants.

After the Louisiana Purchase by the United States in 1803, the region stretching from the Sabine River in the west to the Arroyo Hondo in the east was claimed by both Spain and the United States, leading to little law enforcement by either country. In order to avoid a war over the border, the two countries agreed that the land in contention would remain neutral and free of armed forces from either side. The area became known as the Neutral Ground or Sabine Free State. During this period, the armies in the area—those of the United States and Spain—allowed the running of a ferry, enabling places such as Burr's Ferry in Vernon Parish, to prosper. The rest of the area was lawless, except for the occasional joint military venture to rid the area of "undesirables". However, even with the border dispute, several pioneers did settle the land during this period and were eventually given 2nd class homestead claims. The Adams-Onís Treaty, signed in 1819 and ratified in 1821, recognized the U.S. claim, setting the final Louisiana western border at the Sabine River.

In 1804, the United States organized present-day Louisiana as the Territory of Orleans. In 1805 the territory was further divided into 12 counties. Opelousas County included the entire southwestern section of the state, and extending almost to the Mississippi River in the northeast. By 1807 the counties were reorganized into parishes. St. Landry was one of the original nineteen civil parishes established by the Louisiana Legislature. St. Landry was the largest parish in Louisiana, called the Imperial St. Landry Parish. For a short period after the fall of New Orleans during the Civil War, Opelousas was not just the county seat but was the state capitol (until it was permanently moved to Baton Rouge). Calcasieu Parish was created 24 March 1840 from the western portion of Saint Landry Parish. Calcasieu Parish has since been divided into five smaller parishes. The original area of Calcasieu Parish was called Imperial Calcasieu Parish.

The bill to create out of the northern area of Imperial Calasieu Parish Beauregard Parish was passed in 1912 and took effect at the beginning of 1913. The Parish was named after P.G.T. Beauregard, a Confederate general and one of the designers of the Confederate Battle Flag.

Although one faction wanted the town of Singer to be the parish seat, DeRidder was chosen by a majority of voters on 15 October 1912. (Today, the unincorporated community of Singer still exists and includes a post office, store, and school.) The parish was organized with a police jury as the governing body. Interim, county-wide police jury, judge and justice were appointed. However, on 3 December 1912, an election was held for the offices of sheriff, clerk of court, assessor, coroner, superintendent of public education, police juror, justice of the peace, constable, and members of the school board in each of the wards in the parish.

At least four tribes lived in Beauregard Parish around the time it was founded. One was about six miles south of Sugartown on Indian Branch, another was just north of the old W.B. Welborn home on Bundick Creek, another was along the mouth of Anacoco Creek and another at Merryville, across the street from where Merryville High School now stands.

On November 28, 1941 a United Service Organizations was opened in DeRidder. (Of the more than 500 USO's opened during WW II, this was the first off-post USO to open in the U.S.) 89,000 soldiers visited the DeRidder USO; 15,000 took showers; and 27,000 viewed movies. The building was entered into the National Register of Historic Places on 25 February 1992.

August through September 1941 saw the locally stationed military engaged in the Louisiana Maneuvers—the largest military maneuver in United States history (with more than 500,000 soldiers training for war). The rapid influx of so many military personnel created problems that stemmed, in part, from alcohol overconsumption. In response, residents of Beauregard Parish voted to become a dry parish. 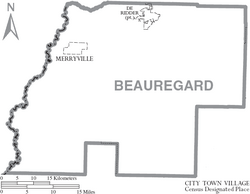 All content from Kiddle encyclopedia articles (including the article images and facts) can be freely used under Attribution-ShareAlike license, unless stated otherwise. Cite this article:
Beauregard Parish, Louisiana Facts for Kids. Kiddle Encyclopedia.