DeRidder is a small city in and the parish seat of Beauregard Parish, Louisiana, United States. A small portion of the city extends into Vernon Parish. As of the 2010 census DeRidder had a population of 10,578. It is the smaller principal city of the Fort Polk South-DeRidder CSA, a Combined Statistical Area that includes the Fort Polk South (Vernon Parish) and DeRidder (Beauregard Parish) micropolitan areas, which had a combined population of 87,988 at the 2010 census.

DeRidder was named for Ella de Ridder, the sister-in-law of a Dutch railroad financier, Jan de Goeijen. Her family originally came from the small town of Geldermalsen in the Netherlands, where she was one of 13 children. She ran away from home at an early age and was presumed dead by her family, who only later discovered that she had traveled to the United States. The town was named for her by her brother-in-law, who brought the first railroad to that area of Louisiana. Prior to that, the little town was known as Schovall. The first train line to serve DeRidder came in 1902. It was the Pittsburgh & Gulf Railroad, later called the Kansas City Southern.

The July 26, 1924, the DeRidder Enterprise stated: "The first house in DeRidder was made of logs and covered with board shingles, split by hand from the logs of the forest. It was constructed in 1893 and was the old homestead house of Calvin Shirley, who was the original owner of the land upon which the first business house and residence of DeRidder were built. Mr. Shirley homesteaded the 160 acres (0.65 km2) which was later platted and became the original townsite of DeRidder."

According to Eva Stewart Frazar, whose family came to DeRidder near the turn of the century, "The largest pine in the world grew where DeRidder now stands - or so it is claimed by timber men who knew."

About the origin of the town, she says, "the Kansas City railroad was built from Kansas City to Port Arthur - and came right through here about 1896. By 1898 the trains were running. The post-office was named Miersburg for the postmaster whose name was Miers. The railroad workers had used this spot for a camping place for the workmen - and people wanted to get near the railroad - so 160 acres (0.65 km2) of land was bought for the town site.

"Immediately following the purchase of the town site, a ramble of rough houses were hurriedly built out of rough lumber... By 1898 the town consisted of nearly 300 people and a number of shack homes and a sawmill. C. Landry and Mr. George Heard had a hotel. There were about 5 small stores, besides. West Brothers had a Rous Racket store on the east side of the track."

By this time DeRidder had a sawmill, and timber was the prime industry of the area. The longleaf pine was the primary tree used in the industry. In 1903, DeRidder was finally incorporated as a town.

In April 1904, a large portion of the business section of DeRidder was destroyed by fire. The cause was apparently arson. A grand jury collected enough evidence for this to indict George Smith, a gambler, with setting the fire. The man reportedly left town. 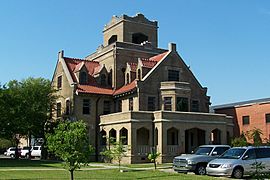 The building known as the "Old Beauregard Parish Jail" is a structure that is considered one of the most distinctive of its type in the US. The structure has the characteristics of the collegiate Gothic architectural style, with shallow arches, dormer windows, and a central tower. This style was popular with colleges, universities and churches. The iron bars in most of the windows give the structure an eerie appearance. Inside, there is a spiral staircase that leads up to three floors of jail cells. Another history-making fact is that each cell had a toilet, shower, lavatory and window. When the jail was in use, prisoners could often be seen waving from the barred windows.

It was built to house 50 or so prisoners, but held 13 in comfort. The walls are 13 to 21 in (0.33 to 0.53 m) thick, made of reinforced concrete with a blasted finish. The first floor has quarters for the jailer and his family. In the jail's basement, a long corridor leads to the courthouse next door.

The jail was used until 1982, when a court action forced it to close. On October 4, 1981, it was put on the National Register of Historic Places, along with several other buildings in DeRidder.

All content from Kiddle encyclopedia articles (including the article images and facts) can be freely used under Attribution-ShareAlike license, unless stated otherwise. Cite this article:
DeRidder, Louisiana Facts for Kids. Kiddle Encyclopedia.