Jasper is a city and the county seat of Jasper County, Texas, in the United States. The population was 8,247 at the 2000 census and 7,590 at the 2010 census. Jasper is situated in the Deep East Texas subregion, about 130 miles (210 km) northeast of Houston. Jasper (the "Butterfly Capital of Texas") holds an annual Butterfly Festival the first Saturday in October to celebrate the migration of the monarch butterflies. 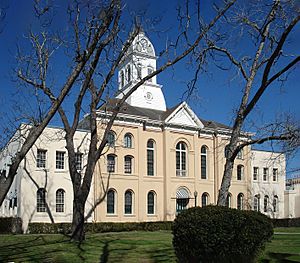 The area, which was then part of Mexican Texas, was settled around 1824 by John Bevil. Thirty families occupied the settlement as early as 1830, when it was known as Snow River or Bevil's Settlement after John R. Bevil, a hero of the American Revolution.

In 1835, the town was renamed after William Jasper, a war hero from the American Revolution, who was killed attempting to plant the American flag at the storming of Savannah in 1779. Jasper was one of the 23 original counties when the Republic of Texas was created in 1836. Jasper became the county seat in 1844, becoming part of the United States with the Texas annexation in 1845.

During the Civil War, the town housed a Confederate quartermaster depot and served as a major center for Confederate communication, transportation, and supply. Jasper was a Confederate Army headquarters for a nine-county area. Following the war, Union troops led by General George Custer occupied Jasper, camping in the town square. The only known soldier of the American Revolution to be buried in Texas was Jasper resident Stephen Williams, in whose honor a marker has been placed on the courthouse lawn.

In 1896, Jasper had a population of 1,200. With the arrival of the Gulf, Colorado and Santa Fe Railway early in the 20th century, Jasper grew into a center for the manufacture of timber products. Lumber from two sawmills, with a daily capacity of 125,000 board feet (295 m³), goods from basket and stave factories, logs, ties, poles, and pulpwood were shipped in 200 cars per month.

Jasper served as headquarters for the Lower Neches Valley Authority's construction program, including Dam "B" at Town Bluff and engineering and surveying for a dam at Magee Bend on the Angelina River. Local farmers raised broiler chickens and beef, and in the 1950s turned to dairying. Jasper also became the headquarters of the Morgan and Lindsey chain of variety stores (otherwise known as dimestores), which at one time operated 85 outlets in Texas, Arkansas, Louisiana, Mississippi, and Alabama.

In June 1998, the murder of James Byrd, Jr. catapulted Jasper into national news and led to the creation of the Matthew Shepard and James Byrd, Jr. Hate Crimes Prevention Act. Three men; William King, Lawrence Russell Brewer, and Shawn Berry, were tried and convicted of capital murder. King and Brewer received the death penalty, while Berry, who was the only suspect who cooperated during the investigation and implicated King and Brewer, was sentenced to life in prison. Brewer has been put to death, while King still awaits lethal injection.

In 2000, Jasper had 8,247 residents and around 250 businesses. Jasper was also one of the primary locations for the recovery of the Space Shuttle Columbia wreckage in February 2003.

Jasper was greatly affected by Hurricane Rita on September 25, 2005, as it moved inland. It suffered considerable damage. The town was also left without power or potable water for about three and a half weeks.

The Jasper Arboretum Project began in 2000 and the Outdoor Learning Center was added in 2012 to create 14 acres of public gardens, walking trails, a master gardener greenhouse, and a nature classroom. 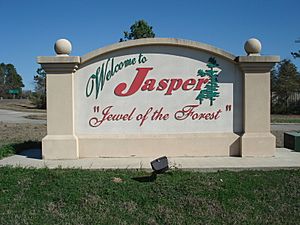 Sam Rayburn Reservoir, about 9 miles north of Jasper, is visited by thousands of vacationers each year; it is the largest lake wholly within the state of Texas. Toledo Bend Reservoir is located a few miles east of Jasper. B. A. Steinhagen Lake is about 11 miles west.

All content from Kiddle encyclopedia articles (including the article images and facts) can be freely used under Attribution-ShareAlike license, unless stated otherwise. Cite this article:
Jasper, Texas Facts for Kids. Kiddle Encyclopedia.