Calcasieu Parish ( French: Paroisse de Calcasieu) is a parish located on the southwestern border of the U.S. state of Louisiana. As of the 2010 census, the population was 192,768. The parish seat is Lake Charles.

Calcasieu Parish is part of the Lake Charles, LA Metropolitan Statistical Area with a population of 194,138. It is also located near the Beaumont–Port Arthur (Texas), Lafayette, and Alexandria metropolitan areas.

Calcasieu Parish was created March 24, 1840, from the parish of Saint Landry, one of the original nineteen civil parishes established by the Louisiana Legislature in 1807 after the United States acquired the territory in the Louisiana Purchase of 1803. The original parish seat was Comasaque Bluff, a settlement east of the river and later called Marsh Bayou Bluff. On December 8, 1840, it was renamed as Marion, Louisiana.

In 1852 Jacob Ryan, a local planter and businessman, donated land and offered to move the courthouse in order to have the parish seat moved to Lake Charles. As the population in this area grew over the years, the original Calcasieu Parish has since been divided into five smaller parishes. The original area of Calcasieu Parish is called Imperial Calcasieu.

The name Calcasieu [p] comes from the Atakapan word, "quelqueshue" in a French transliteration, meaning "crying eagle." It was the name of an Atakapa chief, which French colonists applied to the local river, the Calcasieu River. When the Spanish controlled this area, they referred to this river as the Rio Hondo River (Rio Stondo or "Deep River"). The Americans adopted the French name in turn for the parish.

The early history of the parish dates to the period of the Spanish occupation of Louisiana, after France had ceded this territory following its defeat by Great Britain in the Seven Years War. In 1797, Jose M. Mora was granted a large tract of land between the Rio Hondo (now Calcasieu River) and the Sabine River, known for years as the "Neutral Strip". The area became a refuge for outlaws and filibusters from Carolina, Georgia, and Mississippi of the United States, which had recently gained independence from Great Britain.

The territory was disputed for years between Spain and the United States after France had ceded Louisiana to the American government as part of the Louisiana Purchase of 1803. It was definitively acquired by the United States from Spain with the Adams-Onis Treaty in 1819. The treaty was formally ratified on February 22, 1821. By an act of Congress, approved on March 3, 1823, this strip of land was attached to the district of the Louisiana Territory south of the Red River.

Early settlers to the area included the Ryan, Perkin, LeBleu, Deviers, and Henderson families. Acadian settlers, from the eastern parishes of Louisiana, also migrated to this area. Of French descent and exiled from Acadia, many of these refugees had settled in Louisiana. The parish had a diverse ethnic mix of French and Spanish Creoles, Acadians, Anglo-Americans, and Indians.

When "Imperial Calcasieu Parish" was created in 1840 from the Parish of Saint Landry, it comprised a large area. With the growth of population in the area, this was subsequently divided into five parishes. On August 24, 1840, six men met to organize as representatives for six wards that later became five parishes. The meeting was held in the house of Arsene LeBleu near present-day Chloe. The first jury men were David Simmons, Alexander Hébert, Michel Pithon, Henry Moss, Rees Perkins, and Thomas M. Williams. Their first order of business was to elect officers, appoint a parish clerk, and settle on simple parliamentary rules that would enable the president to keep the meetings orderly and progressive. The jury adopted all of the laws then in force in Saint Landry Parish. They appointed a parish constable, a parish treasurer, two parish assessors, and an operator of the ferry at Buchanan's crossing. The assessors were given two months to assess all of the property in the parish and a salary of $90.

On September 14, 1840, a survey was authorized of land known then as Marsh Bayou Bluff in order to establish a seat of justice (parish seat) and construct a courthouse and jail. On December 8, 1840 the jury chose to rename this community as [Marion. In 1843, the Legislature authorized a vote to move the parish seat.

Finally in 1852 Jacob Ryan was successful in having the parish seat relocated from Marion to the east bank of Lake Charles. This parish seat was incorporated in 1857 as the town of Charleston; it was reincorporated in 1868 as Lake Charles. It is located about six miles (10 km) from Marion, now known as Old Town. The name Lake Charles commemorates one of the first European settlers, Charles Sallier, an Italian who acquired land in this area at the beginning of the 19th century.

In 1870 Cameron Parish was taken from the south portion of Imperial Calcasieu. it was one of several parishes organized during the Reconstruction era by the Republican-dominated legislature, in an effort to build Republican strength. Because areas had been developed as cotton plantations, Calcasieu Parish had numerous slaves. After emancipation, most joined the Republican Party. The area set aside for Cameron Parish had a majority-white population. In the late 1870s, white Democrats regained control of the state legislature through fraud and intimidation. At the turn of the century, they disenfranchised most blacks, then passed racial segregation and other Jim Crow laws.

In 1912 Calcasieu Parish still comprised an area of more than 3,600 square miles (9,300 km2), and it was the largest parish in the state. For this reason it is sometimes called "Imperial Calcasieu". In 1912, the three parishes of Allen, Beauregard, and Jefferson Davis, with a total area of approximately 2,548 square miles (6,600 km2), were formed from the Parish of Calcasieu. These were the last parishes organized in Louisiana. These jurisdictional changes are believed to account for the marked decrease in population of Calcasieu Parish between 1910 and 1920, as seen in the censuses for those years. 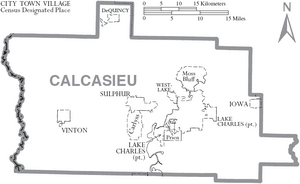 Public schools are operated by the Calcasieu Parish School Board.

All content from Kiddle encyclopedia articles (including the article images and facts) can be freely used under Attribution-ShareAlike license, unless stated otherwise. Cite this article:
Calcasieu Parish, Louisiana Facts for Kids. Kiddle Encyclopedia.