Iberia Parish (French: Paroisse de l'Ibérie, Spanish: Parroquia de Iberia) is a parish located in the U.S. state of Louisiana. At the 2020 census, it had a population of 69,929; the parish seat is New Iberia.

The parish was formed in 1868 during the Reconstruction era and named for the Iberian Peninsula. It is part of the 22-parish Acadiana region of the state, with a large Francophone population. Some of its ethnic French residents had ancestors who settled here after being expelled in the 18th century by the British from Acadia in present-day Canada. Historically, it has also been a center for sugar cane cultivation and produces the most sugar of any parish in the state.

Iberia Parish is part of the Lafayette metropolitan area. The Port of Iberia has a waterway with access to the Gulf Coast.

The parish has both national and state protected areas within the boarders.

Part of the Attakapas Wildlife Management Area is located within Iberia Parish as well as in St. Mary and St. Martin Parishes.

E Company 199th Forward Support Battalion resides in Jeanerette, Louisiana, and B Company 2-156th resides in New Iberia, Louisiana. Both units have deployed twice to Iraq, 2004-5 and 2010, as part of the 256TH IBCT. 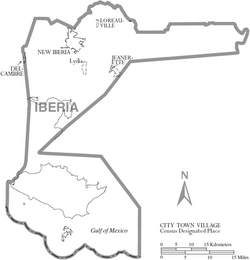 All content from Kiddle encyclopedia articles (including the article images and facts) can be freely used under Attribution-ShareAlike license, unless stated otherwise. Cite this article:
Iberia Parish, Louisiana Facts for Kids. Kiddle Encyclopedia.