Jeanerette is a city in Iberia Parish, Louisiana, United States. Known as "Sugar City", it had a population of 5,530 at the 2010 census, a decrease of 467 from the 2000 tabulation of 5,997. It is two thirds African American, many of them Creoles of color. Jeanerette is the part of the Lafayette metropolitan statistical area; its parish is also one of the 22 included in the Acadiana region, which has had a high proportion of Francophones.

In the 18th century, the land on which Jeanerette now lies was originally procured from the Spanish government by Pierre Zerangue. Zerangue received an “order of survey and settlement” from Spain for 1,052 acres (4.26 km2). Under Spanish law, if a person occupied a piece of property for two years, they could apply for title to the land under an “order of survey settlement.” Nicholas Provost secured the property from the present-day experimental farm to the St. Mary Parish line. He engaged in sugar cultivation, based on slave labor, until his death in 1816.

The town derived its name from John W. Jeanerette, a native of South Carolina who moved to the developing area in the 1820s. First he worked as a tutor for a planter's family, as did numerous educated young adults from northern states, then opened a store and saloon. Having saved some money, about 1830 Jeanerette purchased Pine Grove Plantation, formerly known as Beau Pré (meaning Lovely Meadow/pasture).

Jeanerette offered a portion of his house to be used as a mail depository for the local inhabitants. Later Jeanerette was appointed as the town's first postmaster (he dropped his middle initial.) The name Jeanerette afterward stuck for the post office and town.

During the 19th century, to the north along the Bayou Teche was a settlement of free Creoles of color, now known as Grand Marais. The free persons of color were descended from African and European ancestors, and were often still French speakers into the 20th century.

"Thus we had marched about twenty-six miles in fifteen hours and fought a battle in the bargain. But such terrible hard marching I never witnessed before. Our feet are all blistered and swollen, and we have had scarcely anything to eat – what with hunger, thirst, mud, rain, marching, fighting, dust, etc., etc., we are perfectly worn out." The night after Hyatt's report, the "weather turned unusually cool, and the men got very little sleep."

As Taylor retreated, his army grew smaller. Winters explains that "a number of his men lived in the area through which they now traveled, and many of them slipped away to visit their families. Many of the Louisiana men were conscripts and were serving under duress." Many of the forces deserted with their arms and remained at their homes. Taylor lamented the lack of discipline among the troops. Quite a few from Sibley's Texas brigades also deserted and returned home.

The successful Union general, Nathaniel P. Banks, bivouaced near Jeanerette. Winters reports that some of the Union forces "confiscated a large batch of Louisiana rum . . . and made things lively. . . . After a struggle, the drunk and riotous men were quieted and the weary troops . . . settled down for the night."

Jeanerette was incorporated as a town in 1878 and Joseph E. Provost became the first mayor; its economy was based on the cypress lumber and sugar industries. Its nickname has been "Sugar City". Although its major growth was after the Civil War, it has some surviving antebellum houses in the city and region.

Sugarcane continues as a key factor in the economy. There were until the 21st century three active sugar mills. The one located in the city was closed, dismantled, and its equipment sold in the first decade of the 21st century. Jeanerette is the home of manufacturers of equipment for the cultivation, harvesting and processing of sugarcane. Today, additional sources of income include oil and natural gas, salt, carbon black, a garment distribution center, and fishing.

Jeanerette was the home of dentist and politician Paul N. Cyr, Huey P. Long's lieutenant governor and political opponent. Cyr had a dental office there.

According to the United States Census Bureau, the city has a total area of 2.2 square miles (5.7 km2), all land. 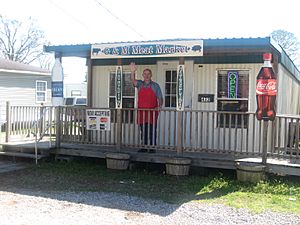 Meat market in Jeanerette sells such regional treats as boudin and cracklins.

The 2020 population estimates program estimated determined there were 5,169 people residing in the city limits. At the 2019 American Community Survey, the racial and ethnic makeup of Jeanerette was 21.1% non-Hispanic white, 77.2% Black or African American, and 1.7% Hispanic or Latin American of any race. Of the population, 1.7% were foreign-born residents from 2015 to 2019. The city had an owner-occupied housing rate of 67.8% and the median gross rent was $725. There were 1,956 households at the 2019 estimates and an average of 2.75 persons per household. The median household income was $34,643 and the per capita income was $17,196. At least 25.4% of the population lived at or below the poverty line.

The climate in this area is characterized by hot, humid summers and generally mild to cool winters. According to the Köppen Climate Classification system, Jeanerette has a humid subtropical climate, abbreviated "Cfa" on climate maps.

St. Joseph School, a private Catholic school (of the Roman Catholic Diocese of Lafayette in Louisiana), served grades K–8 until May, 2011.

The Bureau of Indian Affairs sponsors the Chitimacha Day School southwest of Jeanerette in the Charenton community of unincorporated St. Mary Parish.

All content from Kiddle encyclopedia articles (including the article images and facts) can be freely used under Attribution-ShareAlike license, unless stated otherwise. Cite this article:
Jeanerette, Louisiana Facts for Kids. Kiddle Encyclopedia.