Loreauville is a village in Iberia Parish, Louisiana, United States. The population was 938 at the 2000 census. It is part of the New Iberia Micropolitan Statistical Area.

Initially called Fausse Pointe, then Dugasville for the Dugas family who opened a trading post at the site. The name was changed to Picouville when a Picou family member donated land to build a chapel.

On April 15, 1871, the name was changed from Picouville to Loreauville for Ozaire Loreau, who had contributed the property for the old Catholic Church and cemetery, and had also aided in the agricultural, industrial and political growth of the village.

According to the United States Census Bureau, the village has a total area of 1.0 square miles (1.3 km²), all land.

Additional census data for Loreauville can be found at the following link: [2] 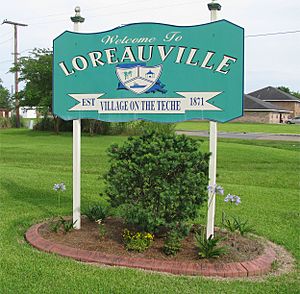 Photograph of the "Welcome to Loreauville" sign at the North entrance to the Village of Loreauville, Louisiana, USA 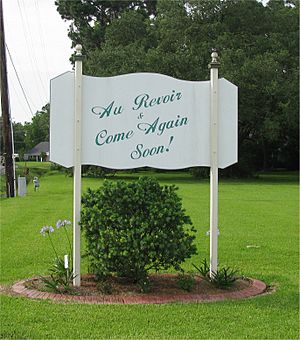 Rear of "Welcome to Loreauville" sign at North end of Village of Loreauville, Louisiana, USA 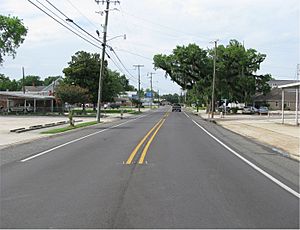 Main street in Loreauville has evolved over the years since the establishment of the village. The progression description that follows begins at the North end of the village and terminates at the South end with the Loreauville hospital. Notable businesses and structures that appeared along main street are:

The following Hurricanes have impacted the Village of Loreauville:

All content from Kiddle encyclopedia articles (including the article images and facts) can be freely used under Attribution-ShareAlike license, unless stated otherwise. Cite this article:
Loreauville, Louisiana Facts for Kids. Kiddle Encyclopedia.