Opelousas is also a common name of the flathead catfish.

Opelousas (French: les Opelousas) is a small city in and the parish seat of St. Landry Parish, Louisiana, United States. It lies at the junction of Interstate 49 and U.S. Route 190. The population was 22,860 at the 2000 census. Although the 2006 population estimate was 23,222, a 2004 annexation should have put the city's population above 25,000. In the 2010 census, however, the population shrunk to 16,634. Opelousas is the principal city for the Opelousas-Eunice Micropolitan Statistical Area, which had an estimated population of 92,178 in 2008. Opelousas is also the 3rd largest city in the Lafayette-Acadiana Combined Statistical Area, which has a population of 537,947.

At only 7.5 square miles, Opelousas is the most densely populated incorporated city in Louisiana. Founded in 1720, Opelousas is Louisiana's 3rd oldest city. The city served as a major trading post between New Orleans and Natchitoches in the 18th and 19th centuries. Traditionally an area of settlement by French Creoles and Acadians, Opelousas is the center of zydeco music. It celebrates its heritage at the Creole Heritage Folklife Center, one of the destinations on the new Louisiana African American Heritage Trail. It is also the location of the Evangeline Downs Racetrack and Casino.

The city calls itself the spice capital of the world, with production and sale of seasonings such as Tony Chachere's products, Targil Seasonings, Savoie's cajun meats and products, and LouAna Cooking Oil. Opelousas was also home to one of the nation's two Yoohoo Factories until their closing.

There were 8,699 households out of which 32.8% had children under the age of 18 living with them, 33.7% were married couples living together, 26.9% had a female householder with no husband present, and 34.9% were non-families. 32.3% of all households were made up of individuals and 15.0% had someone living alone who was 65 years of age or older. The average household size was 2.54 and the average family size was 3.24. 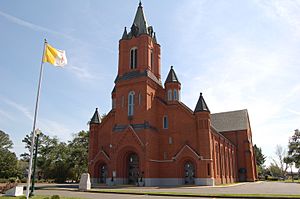 Opelousas takes its name from the Native American tribe Appalousa who had occupied the area before European contact.

The first recorded European arrived in the Appalousa Territory in 1690. He was a French coureur de bois (trapper and hunter). French traders arrived later to trade with the Appalousa Indians. In 1719, the French sent the first military to the Territory, when Ensign Nicolas Chauvin de la Frénière and two others were sent to patrol the area and in 1720, the French established Opelousas Post as a major trading organization for the developing area. The French encouraged immigration to Opelousas Post before they ceded Louisiana to Spain in 1762. By 1769 about 100 families, mostly French, were living in the Post. In 1767 Saint Landry Catholic Church was built. Don Alejandro O'Reilly, Spanish governor of Louisiana, issued a land ordinance to allow settlers in the frontier of the Opelousas Territory to acquire land grants. The first official land grant was made in 1782. Numerous settlers: French, Creoles and Acadians, mainly from the Attakapas Territory, came to the Opelousas Territory and acquired land grants.

After the Louisiana Purchase of 1803, settlers continued to arrive from St. Martinville. LeBon, Prejean, Thibodaux, Esprit, Nezat, Hebert, Babineaux, Mouton, and Provost were some of the early Creole families. (This was Creole as French born in Louisiana, see Louisiana Creole people.) Other early French Creole families were Roy, Barre, Guenard, Decuir, and Bail. In 1820, Alex Charles Barre, also a French Creole, founded Port Barre. His ancestors came from the French West Indies, probably after Haiti (St. Domingue) became independent. Jim Bowie and his family were said to have settled in the area circa 1813. In 1805, Opelousas became the seat of the newly formed St. Landry Parish, also known as the Imperial Parish of Louisiana. The year 1806 marked the beginning of significant construction in Opelousas. The first courthouse was constructed in the middle of the town. Later in 1806, Louisiana Memorial United Methodist Church was founded, becoming the first Methodist, as well as Protestant, church in Louisiana. Five years later, the first St. Landry Parish Police Jury met in Opelousas, keeping minutes in the two official languages of English and French. The city was incorporated in 1821. 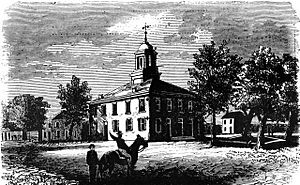 European and American settlement was based on plantation agriculture, and both groups brought or purchased numerous enslaved Africans and African Americans to work as laborers in cotton cultivation. African Americans influenced all cultures as the people created a creolized cuisine and music. The long decline of cotton prices throughout the 19th century created economic problems worsened by the lack of employment diversity.

In 1862, after Baton Rouge fell to the Union troops during the Civil War, Opelousas was designated the state capital for nine months. The governor's mansion in Opelousas, which was the oldest remaining governor's mansion in Louisiana, was the victim of arson on July 14, 2016, and the structure was reduced to a chimney and its foundation. The one story mansion was located on the corner of Liberty and Grolee Streets, just west of the heart of town. An observation tower was removed from the top of the residence in the early 1900s but the remainder of the exterior was identical to its original construction in the 1850s. The entire roof section of heavy rafters was held in place by thousands of wooden pegs, not one nail could be found in the attic. There were plans to restore the building to some of its former splendor. The capitol was moved again in 1863, this time to Shreveport, when Union troops occupied Opelousas. During Reconstruction, the state government operated from New Orleans.

The Union forces led by General Nathaniel P. Banks who occupied Opelousas found what the historian John D. Winters describes as "a beautiful town boasting several churches, a fine convent, and a large courthouse," far superior in appearance to nearby Washington, also in St. Landry Parish. Early in 1864, jayhawkers began to make daring daytime raids in parts of St. Landry Parish near Opelousas. According to Winters in his The Civil War in Louisiana, the thieves "robbed the inhabitants in many instances of everything of value they possessed, but taking particularly all the fine horses and good arms they could find." Winters added that conscription in the area came to a standstill, as men could avoid the army by staying within the lines of the jayhawkers. The conscripts who did not join the lawless element stayed home until the state or the army could protect their families."

After the defeat of the South and emancipation of slaves, many whites had difficulty accepting the changed conditions, especially as economic problems and dependence on agriculture slowed the South's recovery. Social tensions were high during Reconstruction. In 1868, a white mob rioted and killed 25-50 freedmen in Opelousas. Some reports put the number killed even higher, ranging from 200-300, and it was one of the single worst instances of Reconstruction violence in south Louisiana. Opelousas enacted ordinances following the abolition of slavery that served to greatly restrict the freedoms of black Americans. These codes required blacks to have a written pass from their employer to enter the town and to state the duration of their visit. Blacks were not allowed on the streets after 10 p.m, they could neither own a house nor reside in the town, unless the employee of a white person, and they were also not allowed in the town after 3 p.m. on Sundays. 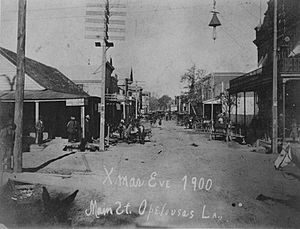 In 1880, the railroad reached Opelousas. In the late 19th century, New York City social services agencies arranged for resettlement of Catholic orphan children by sending them to western rural areas, including Opelousas, in Louisiana and other states. At least three Orphan Trains reached this city before 1929. Opelousas is the heart of a traditional Catholic region of French, Spanish, Canadian and French West Indian ancestry. Catholic families in Louisiana took in more than 2,000 mostly Catholic orphans to live in their rural farming communities.

In May 1927, Opelousas accepted thousands of refugees following the Great Mississippi Flood of 1927 in the Mississippi Delta. Heavy rains in northern and midwestern areas caused intense flooding in areas of Mississippi, Arkansas, and Louisiana downstream, especially after levées near Moreauville, Cecilia and Melville collapsed. More than 81 percent of St. Landry Parish suffered some flooding, with 77 percent of the inhabitants directly affected. People in more southern areas of Louisiana, especially those communities along Bayou Teche, were forced to flee their homes for areas that suffered less damage. By May 20, over 5,700 refugees were registered in Opelousas, which population at the time was only 6,000 people. Many of the refugees later returned to their homes and begin the rebuilding process.

The Yambilee Festival began in 1946 and is the oldest festival held each year in Opelousas. It starts on the Wednesday before the last full weekend of October and continues throughout the weekend with events including concerts, cooking competitions, a parade and beauty pageants.

Since 1982, Opelousas has hosted the Original Southwest Louisiana Zydeco Festival. Usually held the Saturday before Labor Day at Zydeco Park in Plaisance, the festival features a day of performances by Zydeco musicians, with the goal of keeping the genre alive.

1980s synthpop musician Thomas Dolby speaks of Opelousas in the first person in the song I Love You Goodbye from his 1992 album Astronauts & Heretics. The folk-rock singer Lucinda Williams mentions Opelousas in the song Concrete and Barbed Wire from her critically acclaimed album Car Wheels on a Gravel Road. Singer-songwriter and comedian Henry Phillips mentions Opelousas as one of the venues in his song I'm In Minneapolis (You're In Hollywood).

All content from Kiddle encyclopedia articles (including the article images and facts) can be freely used under Attribution-ShareAlike license, unless stated otherwise. Cite this article:
Opelousas, Louisiana Facts for Kids. Kiddle Encyclopedia.