James "Jim" Bowie (circa 1796 – March 6, 1836) was a 19th-century American pioneer, who played a prominent role in the Texas Revolution, culminating in his death at the Battle of the Alamo. Stories of him as a fighter and frontiersman, both real and fictitious, have made him a legendary figure in Texas history and a folk hero of American culture.

Born in Kentucky, Bowie spent most of his life in Louisiana, where he was raised and where he later worked as a land owner. His rise to fame began in 1827 on reports of the Sandbar Fight. What began as a duel between two other men deteriorated in which Bowie, having been shot and stabbed, killed the sheriff of Rapides Parish with a large knife. This, and other stories of Bowie's prowess with a knife, led to the widespread popularity of the Bowie knife.

Bowie's reputation was cemented by his role in the Texas Revolution. After moving to Texas in 1830, Bowie became a Mexican citizen and married Ursula Veramendi, the daughter of the Mexican vice governor of the province. His fame in Texas grew following his failed expedition to find the lost San Saba mine, during which his small party repelled an attack by a large Indian raiding party.

At the outbreak of the Texas Revolution, Bowie joined the Texas militia, leading forces at the Battle of Concepción and the Grass Fight. In January 1836, he arrived at the Alamo, where he commanded the volunteer forces until an illness left him bedridden. Bowie died with the other Alamo defenders on March 6. Despite conflicting accounts of the manner of his death, the "most popular, and probably the most accurate" accounts maintain that he died in his bed after emptying his pistols into several Mexican soldiers. 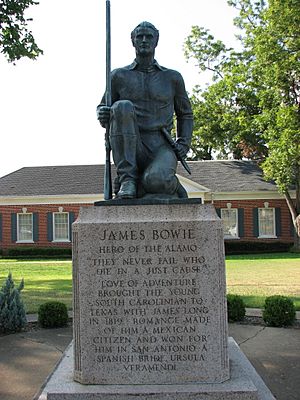 Bowie was born in April 1796 in Logan County, Kentucky. He was the son of Reason and Elve Ap-Catesby (Jones) Bowie. Reason was a farmer and operated a Gristmill. The family moved in February 1800 to New Madrid, Missouri, then part of Spanish Louisiana. In 1801 they settled on farms in what is now Catahoula Parish, Louisiana. There Reason and his brothers swore allegiance to the Spanish government. Reason created a plantation there where he grew cotton and sugarcane. He also raised livestock and bought and sold slaves. This is where Jim and his brothers grew up.

As a teenager Bowie floated lumber to market in the Avoyelles and Rapides parishes in Louisiana. He and his brother Rezin joined the army during the War of 1812. Their regiment was on its way to join Andrew Jackson at New Orleans when the war ended. After the war he and his brothers entered into the slave-trading business. During this time he developed a reputation as a deadly knife-fighter. He then got into land speculation. He bought large parcels of land and sold them whenever he could make a profit. Many of his land claims turned out to be fraudulent. He and his brothers moved to Arkansas where they soon were involved in new land speculation schemes.

In January 1836 he joined William B. Travis as co-commanders of The Alamo. There they were joined by others including Davy Crockett, who arrived in February 1836. On February 23, 1836 Santa Anna arrived with an army of up to 6,000 soldiers. About 189 Texans held off the Mexican army for 13 days. The Alamo finally fell on March 6, 1836 with nearly all the defenders killed. One of the few survivors was Sarah the wife of captain Almaron Dickinson.

The knife Bowie was famous for may actually have been designed by his brother, Rezin P. Bowie. The knife was not the clip point design commonly thought to be the Bowie knife today. It was a large butcher knife. Any large knife carried by frontiersmen of the time was called a Bowie knife. In a later fight, Bowie's hand was badly cut when it slipped down the handle onto the blade. So it had no hand-guard as modern versions do. Rezin (pronounced "reason") gave his younger brother (Jim) the knife so he would always have a backup weapon. It became history after the sandbar fight on the banks of the Mississippi River in September 1827. 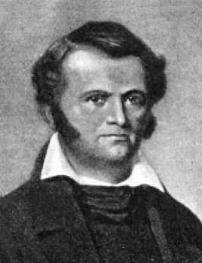 According to his brother John, Jim Bowie was a large man, about 6 feet (1.8 m) tall and about 180 pounds (82 kg). He had light colored hair, grey eyes and a fair complexion. He has been described as being mild mannered. But if insulted, he had a terrible temper that quickly came out.

There have been a number of movies about the Battle of the Alamo. Bowie has appeared as a character in many of them: 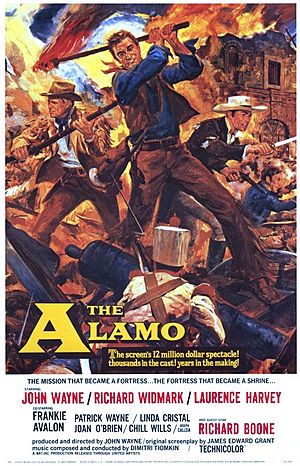 All content from Kiddle encyclopedia articles (including the article images and facts) can be freely used under Attribution-ShareAlike license, unless stated otherwise. Cite this article:
Jim Bowie Facts for Kids. Kiddle Encyclopedia.