The parish is named for Pierre Le Moyne d'Iberville, who founded the French colony of Louisiana.

A few archeological efforts have been made in the Parish, mainly to excavate the Native American burial mounds that have been identified there. The first expedition, led by Clarence B. Moore, was an attempt at collecting data from a couple of the sites, and it set the groundwork for later projects. Clarence was mainly interested in the skeletal remains of the previous inhabitants, rather than excavating for archeological items. Archeologists are especially interested in these sites because of their uniformity and size. Some of the mounds are seven hundred feet long, a hundred feet wide and six feet tall. Most of them contain human remains.

The racial and ethnic makeup of the parish was 48.2% Black and African American, 49.6% non-Hispanic white, 0.1% American Indian and Alaska Native, 0.5% some other race, and 1.5% two or more races. Approximately 2.6% of the population were Hispanic and Latin American of any race.

The Gillis W. Long Center, located on the outskirts of Carville, LA, is operated by the Louisiana Army National Guard. This post is home to the 415TH MI (Military Intelligence) Battalion, the 241ST MPAD, and the 61st Troop Command. The 415TH MI is a subunit of the 139TH RSG (regional support group). 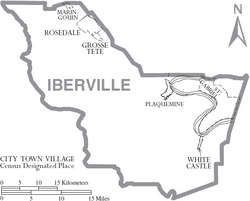 It is in the service area of South Louisiana Community College.

All content from Kiddle encyclopedia articles (including the article images and facts) can be freely used under Attribution-ShareAlike license, unless stated otherwise. Cite this article:
Iberville Parish, Louisiana Facts for Kids. Kiddle Encyclopedia.