Kids Encyclopedia Facts
Not to be confused with Point Coupee, Louisiana.

Pointe Coupee Parish, ( or French: Paroisse de la Pointe-Coupée), is a parish located in the U.S. state of Louisiana. As of the 2010 census, the population was 22,802. The parish seat is New Roads.

Pointe Coupee Parish (originally pronounced pwant coo-pay) was organized by European Americans in 1805 as part of the Territory of Orleans (statehood for Louisiana followed in 1812). There were minor boundary adjustments with neighboring parishes up through 1852, when its boundaries stabilized.

In 2008, Pointe Coupee was one of the communities that suffered the most damage by Hurricane Gustav.

Pointe Coupee Parish has 498.98 miles of highways within its borders. U.S. Highway 190 is the only four-lane roadway in the parish

A Co of the 769th BEB (Brigade Engineer Battalion) is an Engineer Company (Combat) that resides in New Roads, Louisiana. This unit is part of the 256TH IBCT and deployed to Iraq in 2004-5 and 2010. 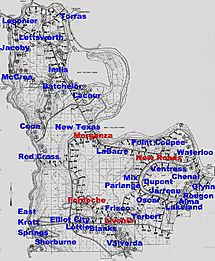 Nan Ya Plastics Corporation America has a large plant near Batchelor. Another large employer is NRG / Big Cajun 1 & 2 power plants near New Roads. The parish's economy is heavily reliant upon agriculture, with sugar cane being one of the main cash crops.

The Pointe Coupee Parish School Board serves the parish. As of 2014 the sole secondary school operated by the parish school board is Livonia High School, serving grades 7 through 12. Pointe Coupee Central High School was closed down in 2014. Current public schools include Stem Magnet Academy, Valverda Elementary, Rougon, Rosenwald, and Upper Pointe Coupee Elementary.

The parish is in the service area of South Louisiana Community College.

All content from Kiddle encyclopedia articles (including the article images and facts) can be freely used under Attribution-ShareAlike license, unless stated otherwise. Cite this article:
Pointe Coupee Parish, Louisiana Facts for Kids. Kiddle Encyclopedia.