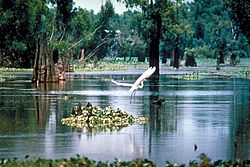 The National Wildlife refuge system began in 1903, by executive order of President Theodore Roosevelt, with the designation of Pelican Island National Wildlife Refuge in Florida. The Atchafalaya NWR became part of a system that includes more than 150 million acres (610,000 km2) in 552 national wildlife refuges, along with other units of the refuge system, and 37 wetland management districts. The refuge was established in 1986, to provide for 1) conservation and management of all fish and wildlife within the refuge, 2) to fulfill the international treaty obligations of the United States with respect to fish and wildlife, and 3) to provide opportunities for scientific research, environmental education, and fish and wildlife oriented recreation, including hunting, fishing and trapping, birdwatching, nature photography, and others.

The refuge is encompassed within 1,500,000 acres (6,100 km2) of hardwood swamps, lakes and bayous. The natural floodplain of the Atchafalaya River flows for 140 miles (230 km) south from its junction with the Mississippi River to the Gulf of Mexico. The basin's dense bottomland hardwoods, Bald Cypress-Tupelo swamps, overflow lakes, and meandering bayous provide a tremendous diversity of habitat for more than 200 species of resident and migratory birds and numerous other wildlife and the area has been recognized as an Internationally Important Bird Area.

The lifeblood of the fishery is the basin's annual flooding and dewatering cycle. Overflows occur during the winter and spring rains, with many areas gradually becoming dewatered during the summer and fall. Sportfishing is popular throughout the basin. Largemouth bass, white crappie, black crappie, warmouth, bluegill, redear sunfish, and channel catfish are the primary species sought. More than 85 species of fish occur in the basin, and their populations frequently exceed 1,000 pounds per acre (100 g/m2). Red swamp and white river crayfish are also important for both a sport and commercial harvest.

Due to the flooding of the Mississippi River and the opening of the Morganza Floodway the refuge was closed to the public May 14, 2011. This was the first time since 1973, and prior to the refuge opening, that the Mississippi was diverted through the basin. Although most of the refuge remains closed the South Farm (Iberville Parish) portion of the Sherburne WMA was open July 1, 2011, to walk-in and ATV traffic. The rest of the area will be closed until further notice.

All content from Kiddle encyclopedia articles (including the article images and facts) can be freely used under Attribution-ShareAlike license, unless stated otherwise. Cite this article:
Atchafalaya National Wildlife Refuge Facts for Kids. Kiddle Encyclopedia.