Kids Encyclopedia Facts
Not to be confused with Wrymouth.

The warmouth (Lepomis gulosus), is a freshwater fish of the sunfish family (Centrarchidae) that is found throughout the eastern United States. Other local names include molly, redeye, goggle-eye, red-eyed bream, and strawberry perch. 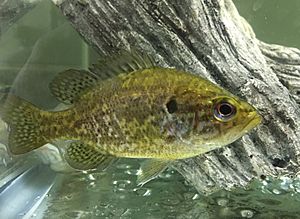 Warmouth are found throughout much of the south in the Mississippi River drainage, from the Gulf and Atlantic coasts and northward to the Chesapeake Bay, and westward throughout Texas to the Rio Grande, and northward into the Great Lakes basin area. The warmouth is a highly aggressive and hardy fish, and they can live in ponds, lakes, rivers, and backwater streams and can often survive in streams with low oxygen levels where other species of sunfish cannot. The species exists with breeding populations in southern portions of Canada, and likely has existed there for many years prior to being detected.

The primary diet of the warmouth consists of insects, crayfish, and other fish. They are sight feeders, and can survive in polluted, low-oxygenated waters where other sunfish cannot, like rock bass. The largest factor affecting warmouth density and biomass in Florida's lakes is the availability of aquatic macrophytes, which allows the fish to ambush prey and use as areas to spawn. The primary diet of young warmouth is microcrustaceans and aquatic insect larvae, whereas larger specimens tend to mainly consume crayfish, freshwater shrimp, and other small fish. Their predators include larger fish, snakes, turtles, alligators, and birds. The primary habitats the warmouth occupies are areas with ample vegetation as cover with slower-moving water, often around stumps, brush piles, and other dense entanglements that allow the warmouth the ability to ambush prey, yet escape larger predators that may threaten them.

A warmouth in Mississippi

Spawning for the warmouth begins usually begins when water temperatures reach 21.1 °C. Their spawning often begins in May and lasts until July. Nests are primarily constructed on rock or gravel substrates, usually located in or near to some type of structure in the water column. Unlike most other Lepomis species, the warmouth does not nest in a colony unless ideal nesting habitat is limited. When in breeding condition, the males' eyes turn red. After the female lays her eggs, the male fertilizes the eggs and aggressively defends the nest, eggs and fry from any intruder-including other females. Males are most commonly found defending the nest for up to five days later until the fry have hatched. Young warmouth spend most of their time hiding under benthic substrate available to avoid predators. Most are considered sexually mature after one year, but often the size of a fish indicates its maturity rather than time. Males usually grow faster than females. Different habitat conditions also reflect the lifespan of the warmouth, which varies from three to eight years.

The warmouth is an extremely adaptable species that can survive in many different conditions, in many river systems east of the Rocky Mountains. Often, the warmouth prefers habitats where slower-moving and polluted water. The most common cause of concern for the warmouth is hybridization with other Lepomis spp. that often inhabit the same areas as the warmouth. The species known to hybridize with it are L. cyanellus and L. macrochirus, as well as largemouth bass Micropterus salmoides and black crappie Pomoxis nigromaculatus. This does not seem to affect the overall health or longevity of the species.

Since warmouths are not migratory fish, their populations should be relatively easily monitored throughout much of their existing ranges. According to Warren, there is no threat or current concern for the warmouth.

All content from Kiddle encyclopedia articles (including the article images and facts) can be freely used under Attribution-ShareAlike license, unless stated otherwise. Cite this article:
Warmouth Facts for Kids. Kiddle Encyclopedia.