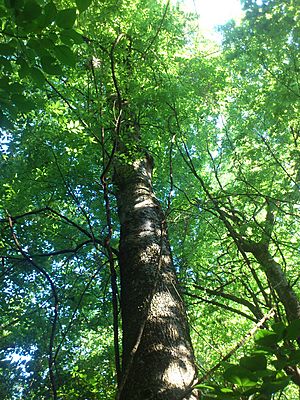 Celtis laevigata is a medium-sized tree native to North America. Common names include sugarberry, Southern hackberry, or in the southern U.S. sugar hackberry or just hackberry.

Sugarberry's range extends from the Eastern United States west to Texas and south to northeastern Mexico. It is also found on the island of Bermuda.

Sugarberry occurs primarily along streams and in moist soils on floodplains. Its sweetish fruit is eaten by birds and rodents, helping to disperse the seeds. The leaves are eaten by a number of insects, for example caterpillars of the Io moth (Automeris io).

Sugarberry mixed with hackberry supplies the lumber known as hackberry. Small amounts are used for dimension stock, veneer, and containers, but the main use of sugarberry wood is for furniture. The light-colored wood can be given a light- to medium-brown finish that in other woods must be achieved by bleaching. The wood is also used to produce sporting goods and plywood.

Sugarberry is frequently planted as a shade-tree within its range. It is well-adapted to urban areas; its elm-like shape and warty bark make it an attractive landscape tree.

All content from Kiddle encyclopedia articles (including the article images and facts) can be freely used under Attribution-ShareAlike license, unless stated otherwise. Cite this article:
Celtis laevigata Facts for Kids. Kiddle Encyclopedia.