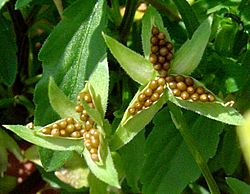 Seed dispersal is the way seeds get away from the parent plant to a new place. "Dispersal" means to spread or scatter. The basic idea is as follows. Plants, obviously, cannot move after they have put down roots. It follows that it is an evolutionary advantage to get their seeds away from the parent plant. If the seeds take root nearby they will compete with each other and the parent plant. Also, a species is more likely to survive when its members are widely spread. This is because local disasters still leave plants in other places.

From the first land plants in the Silurian period for 300 million years to the Lower Cretaceous, virtually all transport of spores and seeds was done by mechanical means. In fact, for most types of plants both fertilisation and dispersal was done by wind. If not wind, then water was the medium. A great change took place with the appearance of flowering plants in the Cretaceous.

What is true of fertilisation is also true of dispersal. Spores, the tiny products of lower plants, are almost always dispersed by wind. So are many seeds. Some seeds, and their later development, fruits, are obviously "adaptations" to a world full of animals. If they are dispersed by being eaten, it is advantageous for them to be nutritious and good to eat. So spores, seeds and fruits may get dispersed mechanicallly or by animals: 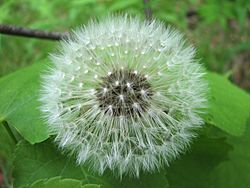 The "parachutes" on the top of this dandelion helps them to be carried away by the wind.

An important detail for a wind-dispersed seed is that it is very light. It must be able to float easily on wind or else it will drop straight to the ground. There are "parachutes" on top of some seeds, like milkweed and dandelion seeds. Some seeds are very small and light, almost like dust. Orchid seeds and poppy seeds are like that. Poppy seeds are inside a little capsule that has little openings around the top. On a windy day, the poppy fruit capsule will sway from side to side, shaking out the tiny seeds out the windows like a salt shaker.

Another kind of fruit that can be wind-dispersed is the maple tree fruit. The maple tree has little schizocarps, which are two-sided winged fruits. They are also called samaras. Their lightness and "wings" help them stay in the air until they have reached a new place with lots of soil. Elm and birch trees also have samaras.

Some fruits can fling (throw) their seeds away when they are ripe. This is a type of rapid plant movement, where the fruit is thrown from a little "machine".

Impatiens – called "touch-me-nots" or "jewel weeds" – is a large genus of flowering plants. When the seeds are ripe and ready, the dried fruit becomes a trigger. When an animal or human touches the plant, it bursts open and sprays the seeds everywhere. If the ground is wet, the seeds can germinate right where they land; they can also stick to the creature that made the capsule burst open. This can help them be carried off to a new place. 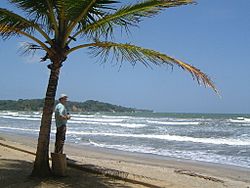 Palm trees use water to disperse their coconuts

These plants usually grow near the water. Once the seed falls into the water, it may be carried for a long distance before it finds a place to grow.

A good example is the water lily. Water lilies' beautiful flowers create a fruit that floats in the water for some time and then sinks to the bottom to take root on the floor of a pond. The seeds of the water lily can be dispersed and germinated in the water.

The palm tree, which grows near the water, also disperses its seeds by water. Powerful ocean currents that connect continents move the palm tree's seeds, called coconuts, to their new home.

The mangrove tree lives right in the water. Their seeds fall from the tree and grow roots as soon as they touch soil. If there is a lot of water, they can be carried far away.

Most nuts, like acorns, walnuts, and pecans are dispersed by both water and animals. The main way that they are dispersed by water is during flood times, or if their plants grow near a river or stream. Many nut trees grow near places that flood quite often. Though water is important for nut trees, it's not as important as it is for other plants, because many trees have roots that can grow a long way from the tree to find good soil and water. 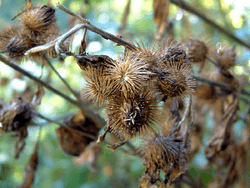 See the spiky "hooks" on the burrs. 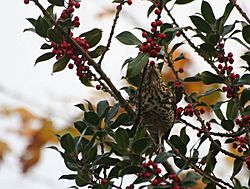 This songbird eats berries, but the seeds are not digested. They come out in the bird's droppings.

There are several ways seeds get dispersed by animals. One example are the burrs that stick to your socks and pants when you walk through grassy fields. The parent plant makes the spiky little burrs from the flower. These burrs are either thrown off the plant and onto the ground, or they stay on the plant until a passing animal (or person) gets the burr in its fur, feathers, or socks. Then the burr is carried to a new place, where animals usually try to get it off themselves. Animals gnaw, scratch, or peck at the burrs to get them off. The burr is then dropped on the ground, away from the parent plant. Many grass seeds have surfaces which catch onto passing creatures. For instance spear grass has spiky tips that can get stuck in passing animals or blown by a strong wind to a new place.

Another way for animals to help in seed dispersal is for the animals to actually plant the seeds themselves. Animals like mice, squirrels, and jay birds collect fruits and nuts during the spring and summer, and they store them for the coming winter. Many times, they save up these fruits and nuts by burying them in the ground - often more than they need. When they come to take their fruits and nuts away, they leave a few buried. The ones that are left buried become plants.

Seeds are often dispersed in droppings (poo). Animals swallow fruit (including seeds): they digest the soft fruit, but the seeds come out in their droppings. In some rainforests, almost 90% of tree species are dispersed by animals. Animals like bats – for instance, the short-tailed fruit bat in South America – can scatter up to 60,000 seeds in one night.

All content from Kiddle encyclopedia articles (including the article images and facts) can be freely used under Attribution-ShareAlike license, unless stated otherwise. Cite this article:
Seed dispersal Facts for Kids. Kiddle Encyclopedia.