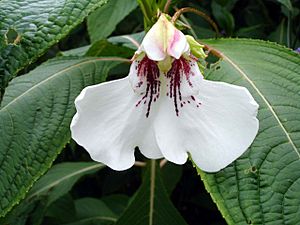 Impatiens is a genus of about 850–1,000 species of flowering plants, widely distributed throughout the Northern Hemisphere and tropics. Together with Hydrocera triflora, they make up the family Balsaminaceae.

These plants derives their scientific name Impatiens (Latin for "impatient") and the common name "touch-me-not" in reference to their seed capsules. When the capsules mature, they 'explode' when touched, sending seeds several metres away. This mechanism is also known as "explosive dehiscence"; see also rapid plant movement.

Impatiens have become one of the most popular garden annuals. Hybrids, typically derived from "Busy Lizzie" (the well-known I. walleriana) and the New Guinea Impatiens (I. hawkeri), have commercial importance as garden plants. I. walleriana is native to East Africa, and was bred through selection by Claude Hope. The original series of impatiens bred by Hope was the 'Elfin' series of cultivars, later improved as the 'Super Elfin' series. Double-flowered cultivars also exist. But in tropical islands, such as Hawaiʻi, Busy Lizzie can also become a noxious weed.

All content from Kiddle encyclopedia articles (including the article images and facts) can be freely used under Attribution-ShareAlike license, unless stated otherwise. Cite this article:
Impatiens Facts for Kids. Kiddle Encyclopedia.