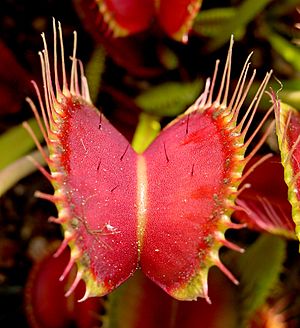 For example, the Venus Flytrap closes its trap in about 100 milliseconds. Some other carnivorous plants, such as the bladderworts, also have a rapid response to insects.

The Dogwood Bunchberry, Cornus canadensis, has a flower which opens its petals and fires pollen in less than 0.5 milliseconds. The record is currently held by the White Mulberry tree, Morus alba, whose leaves are used to cultivate silkworms. It is also notable for the rapid release of its pollen, which is launched at over half the speed of sound. The stamens act as catapults, releasing stored elastic energy in just 25 µs. "This is the fastest motion yet observed in biology, and approaches the theoretical physical limits for movements in plants".

The very widespread genus Impatiens gets its common name, "touch-me-not", from its seed capsules. When the capsules mature, they "explode" when touched, shooting seeds several metres away. A comparatively slow-moving plant is Mimosa pudica, which closes its leaflets in a graceful sequence.

These rapid plant movements contrast with the more common, and much slower "growth-movements" of plants. They are called tropisms.

Charles Darwin in 1880 published his last work before his death, The Power of Movement in Plants.

All content from Kiddle encyclopedia articles (including the article images and facts) can be freely used under Attribution-ShareAlike license, unless stated otherwise. Cite this article:
Rapid plant movement Facts for Kids. Kiddle Encyclopedia.