West Baton Rouge Parish (French: Paroisse de Bâton Rouge Ouest) is one of the sixty-four parishes in the U.S. state of Louisiana. As of the 2010 census, the population was 23,788. The parish seat is Port Allen. The parish was created in 1807.

The parish has a highly rated school system and is one of the few in Louisiana that has privatized school bus services.

The Medora Site, a Plaquemine culture mound site located adjacent to Bayou Bourbeaux on the flood plain of Manchac Point, a hair-pin bend of the Mississippi River in the southeast corner of the parish, was instrumental in defining the Plaquemine culture and period. The site was excavated in the winter of 1939–40 by James A. Ford and George I. Quimby, for the Louisiana State Archaeological Survey, a joint project of Louisiana State University and the Work Projects Administration.

The Baton Rouge, Gross-Tete and Opelousas Railroad was chartered in 1853. The company had an eastern terminus on the west bank of the Mississippi River across from Baton Rouge in what later became the City of Port Allen. A steam ferry boat, the Sunny South, made three trips a day to connect the railroad to Baton Rouge. The railroad ran westward into neighboring Iberville Parish passing the village of Rosedale. After reaching Bayou Grosse-Tete near the village of Grosse Tete, the line turned to the northwest and ran to Livonia in Pointe Coupee Parish, Louisiana, a total distance of twenty-six miles. The roadbed westward from Livonia to the Atchafalaya River had been prepared by 1861.

The advent of the Civil War prevented the railroad from getting the necessary rails to complete the line. The tracks to Opelousas were never built.

After Louisiana seceded, two companies of militia were organized in West Baton Rouge, the Delta Rifles, headed by Captain Favrot and the Tirailleurs of Brusly Landing, a French-speaking company of creoles headed by Captain Williams. The two West Baton Rouge companies were included in the 4th Louisiana Regiment, commanded by Colonel Robert J. Barrow, assisted by Lieutenant Colonel Henry Watkins Allen. The regiment participated in the Battle of Shiloh, the Battle of Baton Rouge and other actions.

The railroad operated up until May 1862 carrying sugar cane, cotton, and Confederate troops, including the Delta Rifles headed by Captain H. M. Favrot. When Union force occupied Baton Rouge in May 1862, all rolling stock was sent to the extreme western end of the railroad for safety where it remained for the duration of the war. Mr. J. V. Duralde was the president of the company during the Civil War period.

The CSS Arkansas suffered the failure of the port engine while proceeding upriver during the battle to get into position to attack the USS Essex. This caused it to veer into the West Baton Rouge bank about 600 feet south of mile marker 223 where it ran hard aground. The crew of the CSS Arkansas then set the vessel afire and scuttled it to avoid it falling into enemy hands.

The defeated Union army under the command of Major General Nathaniel P. Banks passed through West Baton Rouge Parish on Rosedale Road on its return to New Orleans in May 1864 after the failure of the Red River Campaign.

During the final weeks of the American Civil War, heavy rains created crevasses in the West Baton Rouge Parish levee, and flood waters overflowed the area, bringing a temporary halt to military skirmishes. At this time West Baton Rouge as well as Iberville and lower Pointe Coupee parishes were reportedly "infested with unorganized bodies of jayhawkers." They were guilty of many crimes against the people of the area as well as firing on the laborers repairing the levee and upon Federal steamboats in the river. Federal officials and Confederate authorities deplored the lawless actions of these men and both parties desired to break up jayhawking. There was even a truce between Union and Confederate forces until the problem of the jayhawkers was resolved.

The American Civil War devastated the sugar industry that had flourished in the southern part of Louisiana, including West Baton Rouge Parish, prior to the war. The control of the Mississippi River by the Union prevented the sugar crop from going to market, Horses and mules were seized by the Union forces, and crops were left unharvested in the fields, so the sugar industry was bankrupt at the end of the Civil War. Many sugar plantations ware taken over by northern interests. West Baton Rouge Parish was no exception. The conveyance records on file with the Clerk-of-Court of West Baton Rouge Parish show that many plantation properties were sold at sheriff's sale to satisfy debts in the years immediately after the end of the Civil War.

The Baton Rouge, Grosse Tete, and Opelousas Railroad resumed operation after the end of hostilities, but found the economy adverse, because of the devastation in agriculture. Moreover, its sixty-nine slaves had been emancipated and had to be replaced with hired labor. Furthermore, the "Great Crevasse", which occurred in the north end of West Baton Rouge Parish in 1867, caused flooding that greatly damaged the track in a low section about six miles west of the Mississippi River. The now unprofitable rail company eventually ceased operations in 1883. The assets of the railroad were acquired by the Louisiana Central Railroad and operated until 1902.

The Texas and Pacific Railway was chartered by the United States Congress in 1871 to build a southern transcontinental railroad. The route started in Westwego (on the west bank of the Mississippi near New Orleans) and ran northwestward on the west bank of the Mississippi and on to Alexandria, Shreveport, thence westward to Fort Worth, and El Paso where it joined the Southern Pacific Railroad. The route passes though the southwestern part of West Baton Rouge Parish. A junction was established in the southern part of the parish from which a spur line ran twelve miles northward to the west bank of the Mississippi river across from Baton Rouge at a location which was already called "Port Allen". The junction was called "Baton Rouge Junction". The town of Addis grew up around Baton Rouge Junction. The Texas and Pacific acquired additional right-of-way in 1899 to extend the spur from Port Allen to New Roads, Louisiana and beyond to Alexandria, Louisiana.

A crevasse in northern Point Coupeé Parish near Torras in May 1912 caused flooding that spread into northern West Baton Rouge Parish and southward to Addis west of the Texas and Pacific Railroad.

The Southern Pacific Railroad built a spur line from Lafayette, Louisiana to Anchorage in West Baton Rouge very early in the twentieth century. The line ran in a straight line and is notable for crossing the Atchafalaya Basin. The line was never financially successful and was abandoned in the 1920s. Southern Pacific Road occupies the former right-of-way of a small portion of the line.

Starting in 1906, the Missouri Pacific Railroad operated the George H. Walker, a rail ferry, called a "transfer boat", from Anchorage (immediately north of the Sunrise Community) in West Baton Rouge Parish across the Mississippi River to Baton Rouge in East Baton Rouge Parish. The transfer boat was steam-powered and equipped with rails on its deck that allowed passenger and freight railcars to be rolled on and off. It ceased operation September 2, 1947 after the construction of the Huey P. Long Bridge, which included a railway, made its continued operation unnecessary.

The parish is contained within the Two Rivers Region of the Atchafalaya National Heritage Area.

West Baton Rouge is served by the Kansas City Southern Railroad and the Union Pacific Railroad. 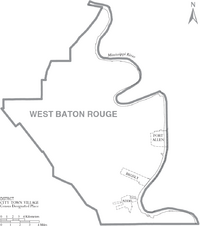 All content from Kiddle encyclopedia articles (including the article images and facts) can be freely used under Attribution-ShareAlike license, unless stated otherwise. Cite this article:
West Baton Rouge Parish, Louisiana Facts for Kids. Kiddle Encyclopedia.