Morganza is an incorporated village near the Mississippi River in Pointe Coupee Parish, Louisiana, United States. The population was 659 at the 2000 census. It is part of the Baton Rouge Metropolitan Statistical Area. The village's zip code is 70759. The Morganza Spillway, a flood control structure between the Mississippi River and the Atchafalaya Basin, is located nearby. 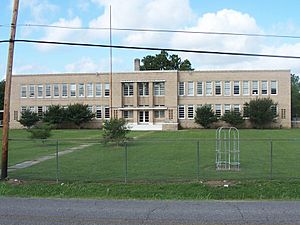 Morganza takes its named from Morganza Plantation, the antebellum holding of Charles Morgan, an early surveyor, political figure and first American sheriff of Pointe Coupee Parish. Morgan, the son of James Morgan from a town of the family's name in Sayreville, New Jersey and a captain in the Second Regiment of the Middlesex County(N.J.) militia during the Revolutionary War. Evidence indicates he was involved in the transfer of slaves from New Jersey to Louisiana in conflict with New Jersey law. The U.S. Post Office opened in 1847, closed some years later, and reopened in 1899. Members of the Campbell family held the position of postmaster until 1970. The town was not incorporated until 1908. To commend the centennial anniversary of the Village of Morganza, U.S. Congressman Rodney Alexander entered the following into the Congressional Record on December 10, 2008:

Madam Speaker, I rise today to commemorate the Centennial Anniversary of the Village of Morganza. Named after the first American sheriff of Pointe Coupee Parish, Colonel Charles Morgan, the Village of Morganza was incorporated in 1908. Originally from Pennsylvania, Morgan came to Pointe Coupee Parish in 1830. He was a prominent land-owner in the parish, and served in the Louisiana Legislature and represented the Mississippi River Authority. During the Civil War, the Village of Morganza was the site of a Union Army encampment. Several battles were fought in this area throughout the war. The largest conflict in Pointe Coupee Parish occurred at nearby Stirling Plantation, on September 29, 1863. Just before the turn of the 20th century, the Morganza Post Office was organized, and the Town Hall was built in 1968. St. Ann's Catholic Church was founded in 1916, but was so severely damaged by storms in 1934 and 1935, the structure was later destroyed. The present church building was dedicated in October 1935. The Village of Morganza is perhaps best known for the Morganza Spillway which helps control flooding on the lower Mississippi River. It is also commonly known for featured scenes in the movie ”Easy Rider” in 1968. Madam Speaker, I ask my colleagues to join me in honoring the Centennial Anniversary of the Village of Morganza. I am proud of the residents of this historical community for ensuring its charm and spirit is as strong today as it was 100 years prior.

Morganza was the site of a Union Army encampment during the American Civil War. The largest battle in Pointe Coupee Parish was fought at nearby Sterling Plantation, on September 29, 1863. Sixteen Federal troops were killed, 45 were wounded, and 462 were taken prisoner. The Confederate losses included 26 dead, 85 wounded, and 10 missing. Although the Battle of Sterling Plantation was a Confederate victory, the Union troops burned the town of Morganza to the ground on October 1, 1863.

Historian John D. Winters in The Civil War in Louisiana (1963) documents the arrival in May 1864 of Federal troops in Morganza under General Nathaniel P. Banks, recently defeated in the Battle of Mansfield in De Soto Parish and abandoning the Red River Campaign. According to Winters,

"The unbearable heat drove the men to construct arbors and bowers to shield themselves from the sun. In a short time an orderly city of tents and company streets stretched along the banks of the river between the water and the levee. Early in the morning and in the late evening the troops were called out for drill periods and gymnastic sports, but most of the day they were free. They spent much of this time lounging in their tents and in the shade, wearing as little clothing as regulations would allow. Some of the men braved the sun and went fishing, or swimming, or visited the sutlers' tents. For more than a month the sweating troops lazed away the long, hot summer days with only an occasional review or alarm to break the monotony.

"The heat and the excessive rainfall began to tell upon the troops . . . Epidemics of scurvy, chronic diarrhea, swamp fever, and smallpox began to take an appalling toll. Many times a day the death march sounded, and new victims were carried to their graves along the river bank."

Located at the lower end of a sharp bend of the Mississippi River, Morganza has been subjected to flooding by the great river a number of times. Levee breaches or "crevasses" occurred at Morganza and Grand Levee just downriver in 1850, 1865, 1867, and 1890. The Morganza Spillway, a major flood diversion project of the U.S. Army Corps of Engineers, is located immediately north of the town. Construction on this mammoth work began in 1939 and was completed in 1955. High water of the Mississippi is channeled between guide levees north and west of the town of Morganza and down into the Atchafalaya Basin, thence to the Gulf of Mexico. The floodgates of this facility have been used only twice—during the high water of 1973 and 2011.

Climate is characterized by relatively high temperatures and evenly distributed precipitation throughout the year. The coldest month is usually quite mild, although frosts are not uncommon, and winter precipitation is derived primarily from frontal cyclones along the polar front. The Köppen Climate Classification subtype for this climate is "Cfa". (Humid Subtropical Climate).

There were 264 households out of which 31.8% had children under the age of 18 living with them, 53.8% were married couples living together, 13.6% had a female householder with no husband present, and 27.3% were non-families. 23.9% of all households were made up of individuals and 14.0% had someone living alone who was 65 years of age or older. The average household size was 2.50 and the average family size was 2.98.

All content from Kiddle encyclopedia articles (including the article images and facts) can be freely used under Attribution-ShareAlike license, unless stated otherwise. Cite this article:
Morganza, Louisiana Facts for Kids. Kiddle Encyclopedia.