Ascension Parish (French: Paroisse de l'Ascension) is a parish located in the U.S. state of Louisiana. As of the 2010 census, the population was 107,215. Its parish seat is Donaldsonville. The parish was created in 1807.

During the American Civil War, desertions had been of major concern to the Confederate States Army. Henry Watkins Allen, before he was governor, reported more than eight thousand deserters and draft-dodgers about Bayou Teche. There were some 1,200 deserters in Livingston, St. Tammany, and Ascension parishes.

Planters in Ascension Parish later complained of raids by guerrillas. In 1864, planter W.R. Hodges requested soldiers to protect the planted fields from such attacks. Union soldiers were accused of "wandering about at will, and helping themselves . . . to whatever could be found," explains the historian John D. Winters in his The Civil War in Louisiana (1963). 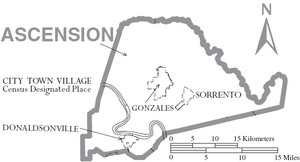 All content from Kiddle encyclopedia articles (including the article images and facts) can be freely used under Attribution-ShareAlike license, unless stated otherwise. Cite this article:
Ascension Parish, Louisiana Facts for Kids. Kiddle Encyclopedia.