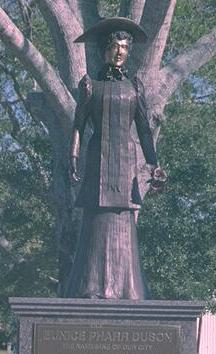 One-time lawman and pioneer land developer C.C. Duson is credited with founding Eunice, which was named for his second wife, Eunice Pharr Duson. He and his brother, W.W. Duson, had already founded Crowley, Louisiana in 1887, and now he looked to the north of the parish for future development. Duson bought 160 acres (0.65 km2) of land from Willie Humble of Prairie Faquetaïque and mapped out a town site, laid out in lots 50-by-140 feet, 12 lots to the block. Next, he persuaded the Southern Pacific Railroad to extend a branch line from Crowley to his new town. Then he began what he and his brother had learned how to do as well as anyone: promote land sales. It was chartered as a village on September 12, 1894, and incorporated as a town on June 4, 1895.

Evangeline Parish was created with the passage of a bill in June 1908. Eunice and Ville Platte were in competition for the parish seat, and Ville Platte was selected by voters on April 12, 1909. After the election, Eunice declared it would remain in St. Landry Parish.

In May 2000 a chemical freight train derailed in Eunice, spilling numerous hazardous chemicals and causing about 15 tank cars to explode and burn; approximately 3,500 residents of the town were evacuated for as many as five days. Over 10,000 residents settled in May 2004 for $65 million with the Union Pacific Corporation in a class action suit, claiming that the corporation had failed to repair a defective section of track.

According to the United States Census Bureau, the city has a total area of 4.7 square miles (12.1 km²). None of the area is covered with water.

The climate in this area is characterized by hot, humid summers and generally mild to cool winters. According to the Köppen Climate Classification system, Eunice has a humid subtropical climate, abbreviated "Cfa" on climate maps.

Eunice is in parts of three parishes, St. Landry, Acadia and Evangeline. Thus the names of certain businesses in Eunice, such as Tri-Parish Bank. Most of the Evangeline Parish portion of Eunice is unincorporated.

Most of the city limits are located in St. Landry parish. This was one of the original parishes in Louisiana.

Acadia to the south actually borders most of the southern city limits, in a close west to east parallel line, with Sittig Street in the center, parish road 7-23 to the east, and both just inside the St. Landry Parish. On the west side the city limits drops south following highway 755 south and includes the airport, the Louisiana State University Eunice campus, as well as the streets around the campus.

Located near the heart of Cajun country, Eunice is famous for its Cajun music, and in November 1997 the Cajun Music Hall of Fame and Museum was founded there. The City of Eunice and the National Park Service sponsor "Laissez les bons temps rouler au rendezvous des cajuns", a live Cajun music show every Saturday night at the Liberty Theatre, an old movie theater that was restored by a "coup de main" by local volunteers after falling into disrepair.

Eunice is home to the Prairie Acadian Cultural Center, a unit of Jean Lafitte National Historical Park and Preserve.

In 2015, The Eunice Rotary Club and the Jean Lafitte National Park and Preserve teamed up to host a revitalized folklife festival known as the Experience Louisiana Festival held each October on the campus of LSU Eunice.

All content from Kiddle encyclopedia articles (including the article images and facts) can be freely used under Attribution-ShareAlike license, unless stated otherwise. Cite this article:
Eunice, Louisiana Facts for Kids. Kiddle Encyclopedia.