Longueuil is a city in the province of Quebec, Canada. It is the seat of the Montérégie administrative region and the central city of the urban agglomeration of Longueuil. It sits on the south shore of the Saint Lawrence River directly across from Montreal. The population as of the Canada 2016 Census totalled 239,700, making it Montreal's second largest suburb, the fifth most populous city in Quebec and twentieth largest in Canada.

Longueuil is a residential, commercial and industrial city. It incorporates some urban features, but is essentially a suburb. Longueuil can be classified as a commuter town as a large portion of its residents commute to work in Montreal. Most buildings are single-family homes constructed in the post-war period. The city consists of three boroughs: Le Vieux-Longueuil, Saint-Hubert and Greenfield Park.

Longueuil is the seat of the judicial district of Longueuil. Residents of the city are called Longueuillois. 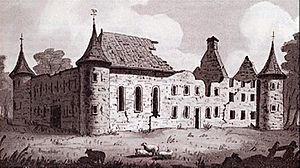 The territory of New France was divided into seigneuries in order to ensure the colony's defence. Longueuil was founded in 1657 by Charles Le Moyne, a merchant from Ville-Marie (present day Montreal), as a seigneurie. According to Abbé Faillon, Charles Le Moyne, lord of the area starting in 1657, named Longueuil after a village which is today the seat of a canton in the district of Dieppe in his homeland of Normandy. In France, the name is spelled "Longueil" and it is rumored that it was a mistake to spell it "Longueuil".

His son, Charles Le Moyne de Longueuil, built Fort Longueuil as his fortified residence. It was constructed of stone between 1685 and 1690 and had four towers.

Fort Longueuil was believed to be occupied by American troops during the American Revolutionary War. It was subsequently occupied by the British. It was demolished in 1810 due to its poor condition. The archaeological remains of Fort Longueuil were recognized as a National Historic Site of Canada on May 25, 1923. The site extends beneath the present-day Saint-Antoine-de-Padoue Cathedral. 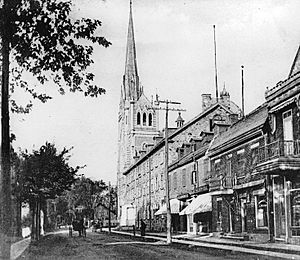 The Co-Cathedral of Saint-Antoine-de-Padoue and Rue St. Charles, Longueuil, QC, about 1910

The seigneurial system ended in 1845 and Longueuil was turned into a parish municipality named Saint-Antoine-de-Longueuil. In 1848, a portion detached from the parish and officially established as the village of Longueuil. This same village became a town in 1874, and then a city in 1920. Musician Paul Pratt notably served as the city's mayor from 1935-1966.

On January 1, 2002, as part of the 2000–2006 municipal reorganization in Quebec, the provincial government amalgamated the former Longueuil with Boucherville, Brossard, Greenfield Park, LeMoyne, Saint-Bruno-de-Montarville, Saint-Hubert and Saint-Lambert. As with the 1960s, the name Longueuil was chosen for the new city. However, after a change of government and a 2004 referendum, Boucherville, Brossard, Saint-Lambert and Saint-Bruno-de-Montarville were re-constituted as independent cities on January 1, 2006. As such, the current city of Longueuil now includes only the former cities of Longueuil (1969-2002), Saint-Hubert, Greenfield Park and LeMoyne. 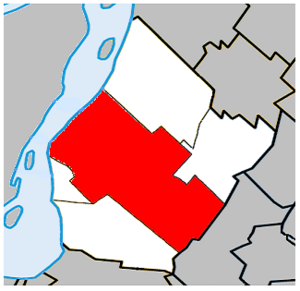 Longueuil occupies 115.59 square kilometres (44.6 sq mi) of land. The city is bordered by the cities of Saint-Lambert and Brossard to the west, Boucherville and Saint-Bruno-de-Montarville to the east, and the Saint Lawrence River and Montreal to the north. The city of Longueuil is located approximately 7 kilometres (5 mi) south of Montreal on the south shore of the Saint Lawrence River.

Longueuil is located in the Saint Lawrence River valley, and is a vast plain. Areas near the river were originally swamp land with mixed forest, and later prime agricultural land. Agricultural land still exists in the portions of the city furthest from the river.

The city of Longueuil also includes Île Charron, a small island in the Saint Lawrence River, and part of the Boucherville Islands.

Like Montreal, Longueuil is classified as humid continental or hemiboreal (Köppen climate classification Dfb). Longueuil has long winters, lasting from November to March, short springs during April and May, average summers, lasting from June to August, and short autumns during September and October.

There are several notable cultural events in Longueuil each year. The Longueuil International Percussion Festival, which features 500 musicians, takes place over six days in July in the neighbourhood of Old Longueuil, and draws 200,000 visitors per year. 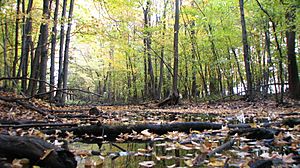 Notable places of worship include the Roman Catholic Co-Cathedral of Saint-Antoine-de-Padoue, Église Nouvelle Vie evangelical church, Saint-Hubert Church [fr], and the Montréal Québec Temple of the The Church of Jesus Christ of Latter-day Saints. 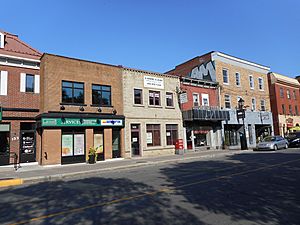 Although a large chunk of Longueuil's work force commute to Montreal, the city nevertheless offers many jobs in a diverse range of industries. Above all, Longueuil benefits from having very low property value despite its close proximity to Montreal.

Longueuil is particularly strong in the aerospace industry. It is home to the headquarters of both Pratt & Whitney Canada and Héroux-Devtek. Pratt & Whitney Canada is Longueuil's top employer with 5,000 employees, while Héroux-Devtek has 550 employees. Also located in Longueuil is the headquarters of the Canadian Space Agency (John H. Chapman Space Center), adjacent to Montréal/Saint-Hubert Airport. Pascan Aviation has its headquarters in Saint-Hubert, Longueuil. Other companies based in Longueuil include Agropur, Innergex Renewable Energy, and the Canadian subsidiary of Hasbro.

In 2002 Artemano Canada, a home furnishing company was founded, with warehouse & distribution centre located in Longueuil. In 2008, Canadian Business ranked Longueuil as the 30th best place to do business in Canada. 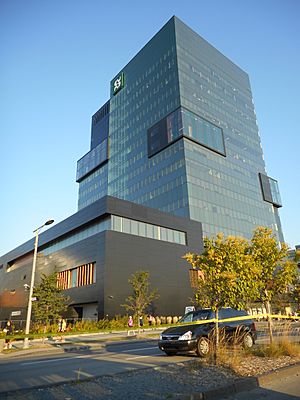 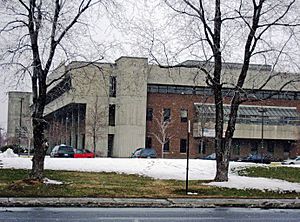 Collège Édouard-Montpetit, the only French CEGEP in Longueuil

The city of Longueuil is served by several educational institutions. Both the Université de Sherbrooke and Université de Montréal maintain campuses in the Borough of Le Vieux-Longueuil.

There are two technical and professional colleges, both located in Le Vieux-Longueuil: these are the Pierre-Dupuy Professional Formation Centre and Collège Info-Technique.

Prior to 1998 the South Shore Protestant Regional School Board served the municipality.

There are also three private francophone secondary schools, all of which are in Le Vieux-Longueuil. They are Collège Charles-Lemoyne, Collège Français and Collège Notre-Dame-de-Lourdes. 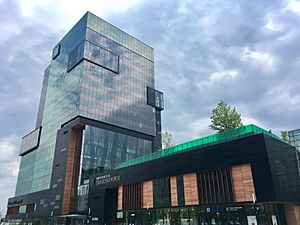 The exterior of the Longueuil–Université-de-Sherbrooke station. 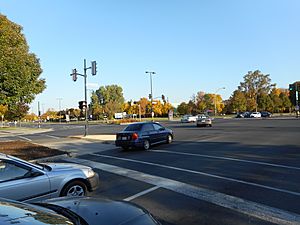 Boulevard Jacques-Cartier Est, at the intersection of boulevard Roland-Therrien

The Saint Lawrence River between the Island of Montreal and the south shore is traversed by only five automobile crossings. Two of these are in Longueuil, the Louis Hippolyte Lafontaine Tunnel (part of Autoroute 25) and the Jacques Cartier Bridge (part of Route 134).

Autoroute 20 is an important highway in Longueuil, bordering the Saint Lawrence River in the Le Vieux-Longueuil borough, where it co-exists with Autoroute René-Lévesque (Route 132), and finally heading eastward toward Boucherville. Autoroute 30 crosses the Saint-Hubert borough in the southern part of the city, between the cities of Brossard and Saint-Bruno-de-Montarville.

Route 116 is another major highway, with its western terminus located in LeMoyne, heading east through the borough of Saint-Hubert toward Saint-Bruno-de-Montarville. Route 112 co-exists with Route 116 from LeMoyne to Cousineau Boulevard in Saint-Hubert, where it heads southeast toward Carignan. Route 134 is a major artery, perhaps better known by its more common names: the Jacques Cartier Bridge on the portion crossing the Saint-Lawrence River, and Taschereau Boulevard which connects the bridge to all three boroughs of Longueuil, and southward toward the city of Brossard. 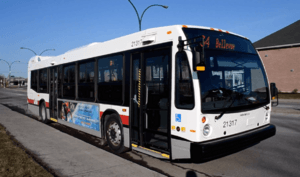 The Réseau de transport de Longueuil (RTL) provides bus service in Longueuil. There are 77 bus routes and 12 shared taxi routes serving 139,374 passengers per day, and 32,738,155 passengers in 2011. Almost all bus lines of the RTL terminate at the Longueuil Bus Terminus. Many buses terminating at the other main bus terminus, Brossard-Panama, cross the Champlain Bridge to arrive at the Terminus Centre-Ville in downtown Montreal (under the 1000 de la Gauchetière office tower, at Bonaventure Metro). 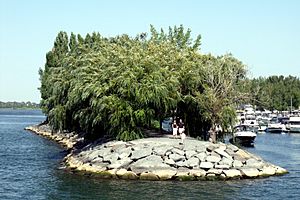 The city is also served by the Longueuil–Université-de-Sherbrooke Metro station, adjacent to the Longueuil bus terminus. The station connects to downtown Montreal via the Yellow Line of the Metro. The Réseau de transport métropolitain (RTM) runs the Mont-Saint-Hilaire commuter train line also serves the south shore. The only commuter train station in the city of Longueuil is Longueuil–Saint-Hubert station. Until the mid-1950s, Longueuil was served by interurban streetcars operated by the Montreal and Southern Counties Railway.

Longueuil also has a small airport, Saint-Hubert Airport. It is one of Canada's most important general aviation airports, ranked 12th busiest airport by aircraft movements.

The city is served by two hospitals. The Charles-LeMoyne Hospital is a Université de Sherbrooke affiliated hospital in the borough of Greenfield Park. It is the main hospital for Longueuil, as well as the neighbouring cities of Saint-Lambert and Brossard. The Pierre-Boucher Hospital is a smaller hospital in the borough of Le Vieux-Longueuil which serves Le Vieux-Longueuil, Boucherville, Varennes, Sainte-Julie, Saint-Amable, Verchères, Calixa-Lavallée and Contrecœur.

All content from Kiddle encyclopedia articles (including the article images and facts) can be freely used under Attribution-ShareAlike license, unless stated otherwise. Cite this article:
Longueuil Facts for Kids. Kiddle Encyclopedia.