Brossard is a municipality in the Montérégie region of Quebec, Canada and is part of the Greater Montreal area. According to the 2016 census, Brossard's population was 85,721. It shares powers with the urban agglomeration of Longueuil and was a borough of the municipality of Longueuil from 2002 to 2006.

The city of Brossard was founded on February 14, 1958 and was known before then as Brosseau Station, itself part of La Prairie-de-la-Madeleine Parish. Its first mayor was Georges-Henri Brossard. At the very beginning, there were 3,400 inhabitants.

The city has some homes dating from the eighteenth and nineteenth centuries, particularly along Chemin des Prairies. Maison Sénécal and Maison Deschamps.

On August 8, 1964 a portion of land from Greenfield Park was added and became the "P" section of Brossard. Furthermore, Notre-Dame-du-Sacré-Cœur was annexed to Brossard on March 25, 1978 becoming the "A" section to form the current city.

In the 1970s, an attempt was made by René Désourdy to construct a cemetery in Brossard. The attempt failed due to the water table being too high in most of the city, and as of 2014 Brossard has no cemetery.

Brossard was forcibly merged into the city of Longueuil on January 1, 2002 as a result of municipal reorganization in Quebec. and a demerger movement was started by Pierre Senécal, Jacques St-Amant and Gilles Larin which resulted in a municipal referendum, the largest demerger vote, that took place on June 20, 2004. 38.70% of the 50,539 qualified voters voted YES for demerger, which met the requirements (35% or more of total voting population) needed for de-amalgamation. As a result, Brossard would continue to be a borough of the city of Longueuil only until the end of 2005.

Brossard is surrounded by four municipalities on the South Shore of Montreal: Saint-Lambert, Longueuil (Borough of Greenfield Park and Borough of Saint-Hubert), Carignan and La Prairie. Brossard is situated on the Saint Lawrence River to the west and by the Saint-Jacques River to the south. (see Geographic location section below)

Many parks are scattered throughout the city of Brossard, including Parc écologique des Sansonnets. The parks are connected to the other areas of the city by about 37 km of biking paths. The city also has a municipal library building connected to its city hall building via an indoor passageway.

Brossard is subdivided into many smaller sections. These sections are characterized by having street names that all begin with the same letter of the alphabet. The only notable exceptions are few major arteries (such as Taschereau Boulevard and Rome Boulevard) that span across two or more sections.

Some constructions in the "A" and "R" sections of Brossard are older than the city itself because they were built in the former communities of Notre-Dame-du-Sacré Coeur and Brosseau Station, respectively. The "M" and "V" sections are the first neighborhoods built after the inauguration of Brossard in 1958.

Brossard is among the most multicultural municipalities in Greater Montreal as there are 23 ethnic groups that represent at least 1% of the population. According to the 2006 census the prominent ethnic groups and their relative share are Canadian (35%), French (23%), Chinese (11%), Irish (6%) and Italian (4%)

Brossard is serviced by Autoroutes 10 (Autoroute des Cantons-de-l'Est), 15, 20 (Autoroute Jean-Lesage), and 30 (Autoroute de l'Acier), as well as Routes 132 and 134 (Taschereau Boulevard). Autoroute 30 runs along the west side of Brossard. Along the Saint Lawrence River on the east side of the city, Autoroutes 15 and 20 overlap with Route 132; 15 to the south and 20 to the north. At the Champlain Bridge interchange, Autoroutes 15 and 20 overlap 10 and feed into the Champlain Bridge, which crosses over into Montreal. Autoroute 10 also meets with Route 134 at the Taschereau Interchange which runs north south through the heart of Brossard.

The Réseau de transport de Longueuil (RTL) serves much of Brossard's territory as well as the rest of the South Shore. Terminus Brossard-Panama and Brossard-Chevrier Park and Ride incentive parking lots are two of RTL's heavily used bus terminals located in Brossard. From both of these terminals there is a regular bus to Terminus Centre-Ville (Bonaventure Metro Station.)

Brossard is the commercial hub of the south shore, most businesses located along Taschereau Boulevard, inside Champlain Mall and Place Portobello or at the lifestyle centre, Quartier DIX30. A particular segment of Taschereau Boulevard near La Prairie and the Saint-Jacques River is home to an exceptionally large concentration of car dealerships offering most available makes and models. 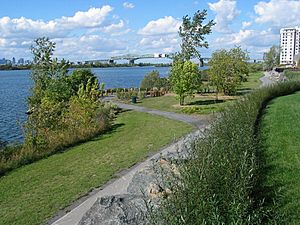 The Saint Lawrence River and the Champlain Bridge.

L'association de soccer de Brossard has been given exclusive authority from the City of Brossard to organize recreational and competitive soccer primarily for youth (ages 4 to 18). Programs are also offered for adults. The Association is affiliated with FIFA via the Canadian and Quebec Provincial soccer federations.

The sport is amongst the most popular in the city given it is quite accessible (i.e. very little equipment required) and the continued increase in popularity of the sport in North America. Consequently, there are more than 2,500 annual registrations of which approximately one third are for the winter season and the rest for the summer season. The summer program is run on the various soccer fields in the city. The winter program is held indoors, at the Bell Sports Complex and at various gyms in the schools within the city boundaries. Notorious footballers from Brossard includes former Canadian national team player Patrice Bernier and ex bundesliga striker Olivier Occean.

The Association also hosts the Brossard Challenge tournament during the first weekend in August every year. The tournament attracts teams from all areas of the province of Quebec. There are also teams from outside Quebec, mainly Ontario.

The Bell Sports Complex is a multipurpose sports facility located in Brossard that contains two ice hockey rinks and one indoor soccer pitch. It is used as the official practice facility of the National Hockey League's Montreal Canadiens.

Figure skating in Brossard is very popular amongst children of all ages. The Brossard Figure Skating Club (Brossard FSC) is the only organization to provide figure skating lessons in accordance with Skate Canada's standards in the city of Brossard.

Lessons and ice-time are held at the Bell Sports Complex facilities, a facility built for the NHL's Montreal Canadiens as a practice and fitness centre, as well as the Michel-Normandin Arena, named after Michel Normandin, a famous Montreal sports announcer.

Brossard FSC offers training for various groups of age and skill, available to the city's population. Its CanSkate 3-5 program offers weekly beginner lessons for children aged 3–5. The Brossard FSC also administers the Skate Canada program to skaters aged 5 and above in group lessons, semi-private lessons, private lessons, and offers specialized development opportunities and free extra ice-time for more advanced skaters. Finally, every few months, Brossard coordinates a series of tests for its more advanced skaters to have certain skills assessed by certified judges and therefore be able to move-up levels in order to learn and practice more advanced skills.

Brossard FSC is very famous for its annual high-quality Ice Show, which attracts many sponsors and enough spectators to hold four representations of the show each year. This event occurs at the end of the winter season, and is the biggest event of the FSC. All skaters are invited to participate. This grand celebration allows young skaters to show their talent dressed in magnificent costumes designed just for them. The routines are choreographed by the club's Skate Canada certified coaches, to music that fits into a chosen theme. All of this is performed to an elaborate light show with spectacular decor. The 43rd edition of this showcase will be held in April 2014.

One of the club's most famous skaters is Sébastien Britten, he was "the 1995 Canadian national champion. He represented Canada at the 1994 Winter Olympics, where he placed 10th. In 1998, he beat several Olympic and World medallists to win the 1998 World Professional Figure Skating Championships held in Jaca, Spain. Following his retirement from competitive skating [in 1997], he began working as a coach and choreographer".

All content from Kiddle encyclopedia articles (including the article images and facts) can be freely used under Attribution-ShareAlike license, unless stated otherwise. Cite this article:
Brossard Facts for Kids. Kiddle Encyclopedia.