Boucherville is a city in the Montérégie region in Quebec, Canada. It is a suburb of Montreal on the South shore of the Saint Lawrence River.

Boucherville is part of both the urban agglomeration of Longueuil and Montreal Metropolitan Community regional government.

Boucherville was founded as a seigneurial parish in 1667 by Pierre Boucher, for whom the city was later named. Pierre Boucher came from Mortagne-au-Perche, France. After having lived in Quebec City and Trois-Rivières, Boucher moved to the Percées Islands by the shores of Saint Lawrence River, where he founded Boucherville.

The first church of the village of Boucherville was built in 1670. This church, made of wood, was eventually replaced in 1712 by a building made of brick, which was in turn replaced by the current Sainte-Famille Church in 1801.

Several families left Boucherville in the 18th century to found the communities of Sainte-Julie and Saint-Bruno-de-Montarville.

1843 Fire and its aftermath

In July 1843 fire destroyed much of the village. Sparks blowing from a steamer ignited a wooden building owned by Mr. Weilbrenner (lot 112). The fire spread and soon most of the village was on fire. In the end, the church, the chapel, two schools, 51 homes and pastures, and 92 other buildings were destroyed.

The village was progressively rebuilt. A new church was built on the site of the old one over the course of the following two years. Parts of the walls and front were reused. A stone school was built in 1851 at the intersection of Notre-Dame and Louis-Hyppolite-Lafontaine streets.

Evolution in the late 19th and early 20th centuries

The village Boucherville was to become an important vacation resort by the end of the 19th century and early 20th century. People from Montreal could access the village by train or ferry. Boucherville experienced significant growth after World War II. This expansion was confirmed by the construction of the Louis-Hippolyte Lafontaine Bridge-Tunnel.

The village of Boucherville gained the status of city in 1957.

Boucherville opened a new 'civic centre', including an indoor and outdoor pool, municipal offices and indoor arena in 1966. The centre was later renamed in memory of the murdered cabinet minister Pierre Laporte. In August 2015, the Centre was closed as part of a three-year, $27 million refurbishment project. The shell of the old building will be blended into the new facility. Some of the equipment, such as the skating rink boards and glass will be reused in the Gilles-Chabot arena.

Today, Boucherville is home to more than 40,000 inhabitants and a large industrial park.

Founder Pierre Boucher is commemorated by a museum in his name at the Séminaire Saint-Joseph and a statue erected at the National Assembly of Quebec, in addition to a monument on the Boucherville's waterfront. 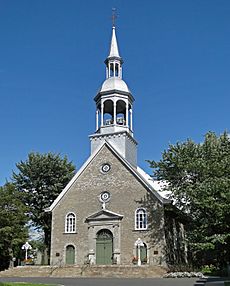 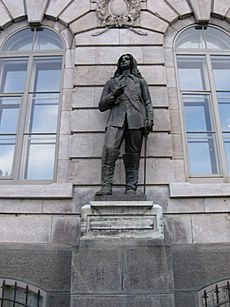 Statue of Pierre Boucher at the National Assembly

The Harmonie neighbourhood is located between the boulevards de Mortagne, de Montarville, de Montbrun and de Normandie. Its development is fairly recent and is essentially residential with many upscale houses. Many park and green spaces decorate the neighbourhood. The multifunctional centre of Boucherville is also there.

Old Boucherville is the original section of the city that contains the former village and Sainte-Famille Church. The neighbourhood is located between Saint-Lawrence River, the boulevards du Fort Saint-Louis, de Montarville et de Montbrun. Many of the buildings there are officially classified as historic monuments.

The Seigneurie is a residential neighbourhood. It is located south of Fort Saint-Louis boulevard, north of de Mortagne boulevard, to the west of de Brouage street and east of the Industriel boulevard. The neighbourhood was built in the early 1960s. The Carrefour de la Seigneurie shopping mall acted as a commercial anchor to the area, hosting a Dominion supermarket, a branch of the Canadian Imperial Bank of Commerce, a convenience store, a pharmacy and a medical clinic. A Texaco gas station stood in its parking lot. All these businesses have since moved on or disappeared and today the mall has been eclipsed by more modern malls such as the Carrefour de la Rive Sud. The neighbourhood is served by two francophone primary schools: De la Broquerie and Pierre-Boucher. There were no English-language schools in the neighbourhood. Students were bussed to either the Boucherville Elementary School (Protestant) or Marguerite Bourgeois (Catholic).

The Le domaine Sabrevois neighbourhood was built in the early 1970s. It is located east of de Montarville boul., between the streets Samuel de Champlain and Jacques-Cartier.

The Faubourg Sainte-Anne was a neighbourhood located at the south-western edge of the village, at the intersection of what are now the Montarville and Marie-Victorin boulevards (then known as "chemin de la Savanne" and "rue Sainte-Famille" respectively). Including lots 153 to 159 and serviced by several small streets, the district was last mentioned in notarized records in 1875. A plan of the neighbourhood survives in the archives of the Séminaire Saint-Joseph de Trois-Rivières.

The original settlers of Boucherville left Trois-Rivières in 1667 along with Pierre Boucher, who had been granted the seigneurie in 1664.

The first baptism was recorded by Father Marquette in 1668.

In 1681, the village included 179 inhabitants, distributed into 39 families, living on 320 acres of cultivated land.

In an 1811 report by Jacques Viger, the village included:

With the increasing price of houses, upscale residences have become less and less affordable in Boucherville in recent years. As such, Boucherville has begun to experience a slowdown in its population growth.

The Îles-de-Boucherville National Park on the Boucherville Islands is a Quebec National Park located in the Saint Lawrence River facing the rest of the city. They are uninhabited but serve as a natural/recreational area for residents and tourists.

As of 2015, there is one multiplex theatre in Boucherville, part of the Cineplex Odeon chain.

In 1973, a youth drop-in centre, the Maison des Jeunes was opened at 78 boulevard Marie-Victorin. From March 30, 1974 to late June 1974, the Maison enjoyed financial support from the local Club Richelieu.

On November 19, 1975, the Maison then moved to the old town hall, at 20 rue Pierre-Boucher. It remained there for over a quarter century, with the exception of three months in 1982 when it was relocated to the Boucherville Elementary School while the building was being renovated.

All content from Kiddle encyclopedia articles (including the article images and facts) can be freely used under Attribution-ShareAlike license, unless stated otherwise. Cite this article:
Boucherville Facts for Kids. Kiddle Encyclopedia.