Hāna is a census-designated place (CDP) in Maui County, Hawaii, United States. The population was 1,235 at the 2010 census. Hana is located at the eastern end of the island of Maui and is one of the most isolated communities in the state. It is reached mainly via the Hana Highway, a long, winding, 52-mile-long (84 km) highway along Maui's northern shore.

The ancient district of Hāna

The modern district of Hāna

Like most of Hawaii, Hana was probably first settled between 500 and 800 AD by Polynesian peoples.

The first sugarcane plantation in the area was established by George Wilfong in 1849, and by 1883 there were six plantations operating in the area. By 1946, however, the last sugarcane plantation had closed, leading plantation workers to move mostly to the west side of Maui. That same year saw the opening of the Ka-'uiki Inn, today known as the Hotel Travaasa - Hana, which helped transition the economy towards tourism.

The winding, famously scenic Hana Highway was completed in 1926. Originally paved with gravel, it provided the first land vehicle access to the town. Hana's population peaked in the first half of the twentieth century, with a population of about 3,500.

Near Hana are natural areas and several swimming holes in the Haleakala National Park.

Hana's climate is hot and wet year round, typical of a tropical rainforest. 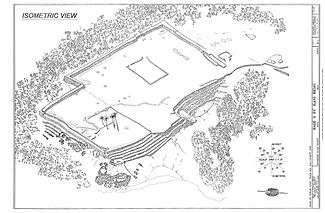 Hana's surfing culture was profiled by writer Susan Orlean in Outside magazine in 1998, inspiring the 2002 film Blue Crush.

All content from Kiddle encyclopedia articles (including the article images and facts) can be freely used under Attribution-ShareAlike license, unless stated otherwise. Cite this article:
Hana, Hawaii Facts for Kids. Kiddle Encyclopedia.