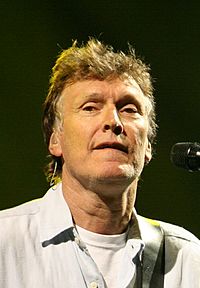 Stephen Lawrence Winwood (born 12 May 1948) is an English singer, songwriter and musician. His music covers genres such as progressive rock, blue-eyed soul, rhythm and blues, blues rock, pop rock and jazz. He was a member of groups such as The Spencer Davis Group, Traffic, Blind Faith and Go. He had a successful solo career with hits including "While You See a Chance", "Valerie", "Back in the High Life Again" and two US Billboard Hot 100 number ones, "Higher Love" and "Roll with It". He was added into the Rock and Roll Hall of Fame as a member of Traffic in 2004.

Winwood was born in Handsworth, Birmingham. He has been married twice and has four children.

All content from Kiddle encyclopedia articles (including the article images and facts) can be freely used under Attribution-ShareAlike license, unless stated otherwise. Cite this article:
Steve Winwood Facts for Kids. Kiddle Encyclopedia.