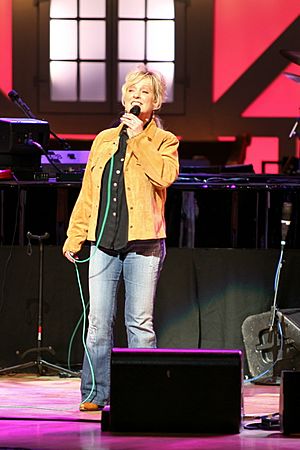 Constance June Meador (also known as Connie Smith; born August 14, 1941) is an American singer. Her contralto vocals have been described by music writers as significant and influential to the women of country music. A similarity has been noted between her vocal style and that of Patsy Cline.

Smith was discovered in 1963. She signed with RCA Victor Records in 1964. She remained with the label until 1973. Her first single "Once a Day" hit #1 on the Billboard Hot Country Songs chart in November 1964. It was at the top position for eight weeks. "Once a Day" became Smith's biggest hit.

Smith was nominated at the Grammy Awards for Best Female Country Vocal Performance.

Smith's success continued with another 19 top-ten hits during the 1960s and 1970s. Those included "Ain't Had No Lovin'", "Cincinnati, Ohio" and "I Never Once Stopped Loving You."

Smith was born in Elkhart, Indiana. She later lived in West Virginia and Ohio.

All content from Kiddle encyclopedia articles (including the article images and facts) can be freely used under Attribution-ShareAlike license, unless stated otherwise. Cite this article:
Connie Smith Facts for Kids. Kiddle Encyclopedia.