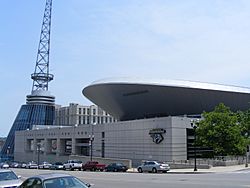 The Bridgestone Arena is a sports arena in Nashville, Tennessee. The arena opened on December 18, 1996, and is the current home to the Nashville Predators of the National Hockey League (NHL).

The arena was also home to the Nashville Kats of the Arena Football League from 1997 until 2001 when the franchise was sold and was moved to Georgia to become the Georgia Force. The team was reincarnated and played in the Gaylord Entertainment Center from 2005 to 2007.

Aside from sports, the arena has also hosted the CMA Awards and CMT Music Awards.

All content from Kiddle encyclopedia articles (including the article images and facts) can be freely used under Attribution-ShareAlike license, unless stated otherwise. Cite this article:
Bridgestone Arena Facts for Kids. Kiddle Encyclopedia.