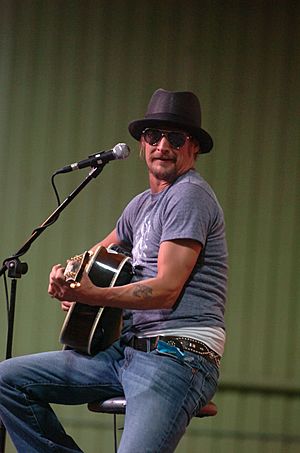 Robert James "Bob" Ritchie (better known as Kid Rock) (born January 17, 1971) is an American singer-songwriter, rapper, musician, record producer, and actor. He has made songs with parts of many different styles of music, including rap, heavy metal, and country.

Kid Rock grew up in Romeo, Michigan, which is near Detroit. He made his first album, Grits Sandwiches for Breakfast, in 1990, but it did not have much success. He made several more records over the next few years, but they did not sell much either. However, by 1998, bands such as Korn and Limp Bizkit were becoming popular with music that had both rap and heavy metal. Because Kid Rock was making similar music, Atlantic Records, a big record label, signed Kid Rock to a contract. In 1998, his album Devil Without A Cause came out. Songs such as Bawitdaba and Cowboy came out, and Kid Rock was a star.

Kid Rock is a supporter of people in the United States Military. He has performed several concerts for soldiers, and gave soldiers free copies of his album Born Free.

In 2004, Kid Rock performed during the Super Bowl halftime show. Kid Rock was criticized for playing while wearing an American flag.

Kid Rock has been mentioned as a possible candidate for the 2018 U.S. Senate election in Michigan. On July 12, 2017, he shared a photo of a "Kid Rock for US Senate" yard sign on Twitter. He later confirmed that he is in fact running for the Senate.

All content from Kiddle encyclopedia articles (including the article images and facts) can be freely used under Attribution-ShareAlike license, unless stated otherwise. Cite this article:
Kid Rock Facts for Kids. Kiddle Encyclopedia.