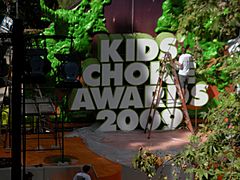 Finishing up with the "Orange Carpet" for the Kids' Choice Awards at Pauley Pavilion, UCLA campus 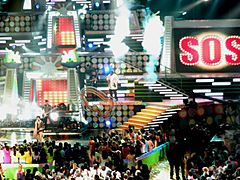 According to Nickelodeon, the show was broadcast in more than "228 million households across Nickelodeon's 50 channels in Europe, Russia, the Middle East, Asia, Australia and Latin America." It had 7.7 million viewers. More votes than ever were cast for this year’s KCAs. A record 91.1 million votes were cast on Nickelodeon websites.

Prior to the live telecast, Lily Collins, Pick Boy and JJ hosted the "orange carpet", featuring celebrity interviews and a live performance by Miranda Cosgrove outside Pauley Pavilion.

Presenters and performers, and stunts for KCA 2009

All content from Kiddle encyclopedia articles (including the article images and facts) can be freely used under Attribution-ShareAlike license, unless stated otherwise. Cite this article:
2009 Kids' Choice Awards Facts for Kids. Kiddle Encyclopedia.