Joshua Michael Peck (born November 10, 1986) is an American actor, voice actor, comedian, and YouTube personality. He is best known for playing Josh Nichols in the Nickelodeon live-action sitcom Drake & Josh. He began his career as a child actor in the late 1990s and early 2000s, and became known to young audiences after his role on The Amanda Show. He has since acted in films such as Mean Creek, Drillbit Taylor, The Wackness, ATM, and Red Dawn, along with voicing Eddie in the Ice Age franchise. He also starred as Gerald in a lead role with John Stamos in the series Grandfathered. He formerly voiced Casey Jones in Teenage Mutant Ninja Turtles. He also starred in a Netflix comedy, Take the 10, along with Tony Revolori.

As of 2017, Peck began branching out in YouTube starting his own comedic lifestyle YouTube channel, Shua Vlogs, featuring David Dobrik and his wife Paige O' Brien.

Peck was born in New York City, New York, where he attended P.S. 40 and The Professional Performing Arts School. His parents were unmarried at the time of his birth and he has never met his biological father. He grew up with his mother, Barbara, who is a career coach, and his maternal grandmother. Peck is Jewish, and had a Bar Mitzvah ceremony. He had asthma during his childhood, and often stayed indoors watching old sitcoms. He was inspired to become involved in stand-up comedy when he was eight years old. 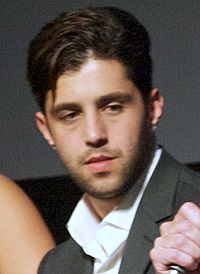 Peck at the Red Dawn premiere in 2012

Peck subsequently appeared at TADA! Youth Theater and performed stand-up comedy at Carolines on Broadway for the Audrey Hepburn foundation. At the age of 13, he was offered a role on Nickelodeon's The Amanda Show and, at his mother's suggestion, accepted the part and moved to Los Angeles to further pursue an acting career.

Peck made his film debut in Snow Day (2000), and appeared regularly on The Amanda Show until the end of its run in 2002. He also starred opposite Alex D. Linz and Zena Grey in the theatrical film, Max Keeble's Big Move, which was released on October 5, 2001. In 2001, he guest starred in an episode of the NBC drama ER called "Thy Will Be Done". During this period, Peck appeared in several independent films, including Spun and 2004's Mean Creek, for which he received critical praise. He was cast as Josh Nichols, opposite Drake Bell's Drake Parker, in another Nickelodeon sitcom, Drake & Josh, which began airing in 2004 and gained Peck recognition among young audiences. Peck's character, Josh Nichols, was smart, funny, and organized, but was always being tormented along with Drake by Megan Parker (Miranda Cosgrove), Drake's younger sister. Both characters sing in a remake of the song "Soul Man" by Sam and Dave. In 2006, Bell and Peck starred in their own TV movie called Drake & Josh Go Hollywood, and in 2007, they starred in a sequel called Drake & Josh: Really Big Shrimp. Josh was nominated for Favorite Television Actor at the 2008 Nickelodeon Kids' Choice Awards for his work on Drake & Josh. Peck also made his debut as a director in the Drake & Josh episode, "Battle of Panthatar". He also directed his co-star Drake Bell's music video for the theme song to Drake & Josh, "Found a Way". He has also appeared in the series finale of What's New, Scooby-Doo?, an episode of Codename: Kids Next Door called "Operation: C.A.K.E.D.-F.I.V.E.", and the direct-to-video New Line Cinema film Havoc. Peck returned to the character of Josh Nichols in 2008 for the television film Merry Christmas, Drake & Josh.

In 2006, Peck appeared in the independent film Special, which premiered at the Sundance Film Festival, and voiced Eddie, one of two possum brothers, in the animated sequel, Ice Age: The Meltdown, which was released on March 31 of that year. Peck played a high school bully in 2008's Drillbit Taylor, and starred in the films The Wackness (released July 2008), American Primitive, Safety Glass, and reprised his role as Eddie in Ice Age: Dawn of the Dinosaurs.

In 2011, Peck had a cameo role on the hit Nickelodeon show Victorious as an audience member for a play Jade wrote. In 2012, Peck starred in the remake of Red Dawn, and once again reprised his role as Eddie, in Ice Age: Continental Drift. In 2013, he began voicing Casey Jones in Nickelodeon's Teenage Mutant Ninja Turtles.

In 2014, Peck appeared as Danny Norwood in the pilot of The Rebels, one of Amazon Studios' five adult test pilots released on Amazon Video in early 2014.

In 2015, Peck was cast as a lead in the comedy series, Grandfathered. He starred alongside John Stamos. Grandfathered premiered on September 29 and has gained generally favorable reviews from Rotten Tomatoes and Metacritic. Both Peck and Stamos are nominated for a 2016 People's Choice Award in the category "Favorite Actor In A New TV Series".

In 2016, Peck was cast as Ross in the FOX series Pitch. He appeared in 2 episodes as a statistics analyst. The series was cancelled after 10 episodes.

In the fourth season of Drake & Josh, Peck was noticeably thinner. He said:

I made a conscious effort to lose weight because I knew I could be happier as well as being healthier. I started by going on a diet a year and a half ago and I got a personal trainer, but I definitely have a healthier lifestyle now. Also I feel that because I do so much television, I am a better role model. I don't really understand why I should be a role model, but I know that kids do look up to me, so it is my responsibility to motivate people and be inspiring. I hope that I can do that for kids. It doesn't really matter what you look like though.

He is also a prominent personality on the video-sharing services Vine and Snapchat. He now stars in vlogs made by David Dobrik on YouTube.

In June 2017, Peck married his longtime girlfriend, Paige O'Brien. In August 2018, the couple announced they were expecting their first child.

All content from Kiddle encyclopedia articles (including the article images and facts) can be freely used under Attribution-ShareAlike license, unless stated otherwise. Cite this article:
Josh Peck Facts for Kids. Kiddle Encyclopedia.